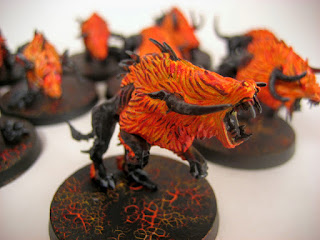 I finished up my squad of flesh hounds and I got a chance to try them out on the battlefield.

After a two week vacation, I was itching to get a game in, so this weekend I played a game with all of the models I have painted this summer. 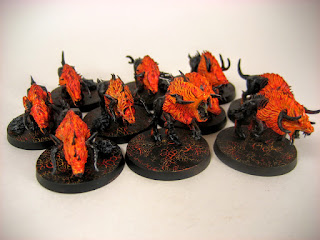 I took a slaughtercult with a gorepack and an allied knight.  I took a blood throne for my HQ to see how things went with a maulerfiend and some spawn.

My opponent, Cam, brought blood angels with a couple of vindicators, a bunch of razorbacks, and a forge world knight variant.

By the end of turn two, it looked like I had things in the bag.  My maulerfiend had locked his librarian and honor guard in combat, I managed to take out both vindicators, his furioso dread in a drop pod got promptly crushed by my helbrute, and I was in a position to charge his knight.  However, his knight had a wacky gun that could make a vortex if he rolled hot, and he promptly opened up a vortex over my spawn, blood throne, and bloodletters.  This became even more devestating when the vortex scattered on top of my maulerfiend and freed the honor guard.

The knights fought each other, I dropped him to two hull points before getting destroyed, and my soul grinder charged in to finish the job.  By this point neither of us had any units on our opponent's side of the board, but since I was way ahead on points I could play conservatively.

This game was mostly a 'proof of concept' game to test out maulerfiends with a blood throne.  I'm not fully convicted, but the initial results are promising.

Next on my table:  I am finally getting around to painting my terrain.  Here is an initial piece. Nothing fancy, but it looks so much better than the bare wood.  I'm going to pick up some hard board from the store so I can have area bases.