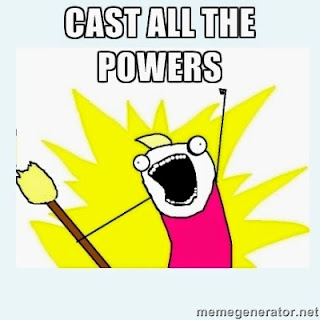 I have had a request for information comparing psychic shooting and traditional shooting.  As I was working the probabilities I thought to myself, "Oh the number of warp charges per power easily falls into a game theory problem.  That means it can be optimized!"  Instead of the planned 'psychic shooting vs traditional shooting' I give you 'How you should plan your psychic phase.'

I have one fairly large assumptions in all of my calculations: All powers of the same level have the same value.  What I am going to show is how to cast (on average) as many powers as possible.  The assumptions are there because if we start to argue over "Invisibility is clearly better than prescience" all of the math is out the window.

These concepts are especially important for armies such as Daemons or Grey Knights where you are likely to have many psykers who all have the same power.  Daemons may not care which psyker manages to cast summon, but they want to maximize the total number of successes.

Warp Charge 1 Powers:
Fortunately this is the simplest situation.  Give each power an equal (or as close as possible) amount of dice.  This is always going to be your best option when compared with putting all of your dice on a single power.

*Math recap: Expected average or expected value is the average number of successes over an infinite period of time.  The expected average of the number of 6's in a roll of 10 dice 1/6*10 or 1.667.  While it is impossible to get exactly 1.667 sixes this is the theoretical average.*

A caveat though is that you don't want to add an additional power until you can give that power 3 dice.  So with 6 warp charges you will aim for 2 powers, same with 7 and 8, but once you hit 9 warp charges then you should start aiming for 3 powers.

Warp Charge 3 Powers:
Warp charge 3 powers are similar to warp charge 2 because there is a threshold where it is better to spread out your dice rather than concentrate on a single power. With warp charge 3 we want a minimum of 5 dice per power, so if you have a total of 9 warp charges then you want to throw them all at one power, but as soon as you have 10 it is better to try and cast 2 powers with 5 dice each.

A Mixed Bag of Tricks:
Up until this point we have only been dealing with powers requiring the same number of warp charges, but this is a rarity.  Usually you have a handful of powers and a mix of warp charge 1, 2, and 3.  This becomes trickier because all of a sudden we have to place value on our powers.  I feel like there are two main ways to think about things.

As long as we split our warp charges into groups of 5, 3, and 1 we will be working with ideal results.  Eight warp charges could be split into 5 and 3, or 3, 3, 1, 1, or any other combination of 5, 3 and 1.  Groups of 2, 4, or anything else will yield less than ideal results.  It may not always be possible to end up with every group being 1,3, or 5 simply because of the powers you can cast, but that would be the point where you start boosting up your powers.

For instance if your one psyker has a level 1 power and two level 2 powers and you have 8 warp charges to spend then things aren't going to work out evenly.  You can allocate 1, 3, and 3 warp charges respectively, but that still leaves you with one left over.  This last charge should just be used to boost up whichever power is most important.

Denying the Witch
Optimizing your deny the witch rolls work similarly to casting powers, but the break points are much higher.

If your opponent only has 1 success then only use one die to try and deny the power.  Most mastery level 1 powers aren't that big of a deal, so don't commit too much to them because...

When dealing with 2 successes your chances of denying become exponentially smaller.  In fact you need to be able to commit a full 8 dice to attempt to deny two successes.  Just as before this is a break point, so with 15 dice you still want to throw everything at canceling one power, but once you hit 16 dice then it is better to try and cancel two powers.  Most armies can't muster this, so people are generally stuck throwing all of the dispel dice at a single power.

I know some of you are thinking, "But you won't know how many successes your opponent has until they try and cast their power."  True, but knowing the volumes of dice needed to cancel two or more successes means you have a decent idea when to let a power go through or when to try and cancel.

Putting it All Together

Previously I had not put a lot of thought into how I planned out my psychic phase.  I had thrown a handful of dice at whatever power I wanted, but now I am going to be more deliberate in my actions.

Aside from planning your psychic phase you can also use this information to help plan your army.  If you want to build a summoning army  I would probably aim for having 11+ mastery levels to generate warp charges.  At 11 automatic charges you have a 50% chance of rolling enough to cast three summoning powers a turn.  This won't happen all of the time, but then you can buff up your two powers that you will always have available.

I hope this has been helpful.  This was something I hadn't seen a lot of talk on, but hopefully this was as enlightening for everyone else as it was for me.

First up for our special cases is re-rolling failed dice when harnessing warp charges.  With re-rolling the chances of success for each individual dice increases to 75%.  Your strategy for warp charge 1 powers isn't going to change because you should have been trying to cast as many powers as possible to begin with.    The threshold for warp charge 2 powers is now gone and you should be good to go with casting powers with only two dice.  Warp charge 3 powers do still have a threshold, but it drops down to four dice.  This means that when you have a total of eight dice it is better to cast two powers rather than one.

Casting on a 3+ seems to have cropped up a couple of places, and so there have been a few requests for this information as well.  Just as before the strategy for warp charge 1 powers doesn't change, but they do have increased chance of success.  Warp charge 2 powers get interesting because the expected value of using four dice to cast one power is exactly the same as trying to cast two powers with two dice for each.  This means that it is up to you whether or not you want to try and go for that extra power; over a long enough period of time the results should be the same.  Warp charge 3 powers will have a threshold of four dice just like in the previous situation.

The strategies for these two situations are nearly identical, but having a re-roll on individual dice is going to have a higher chance of casting powers rather than casting on a 3+.

Flickering fire is an interesting power because you can increase the warp charges needed in exchange for increasing the number of shots.  Let's look at two situations.