I finally got to play a game with the new Khorne Daemonkin.  It was a bloodbath, so both Khorne and myself were pleased.
Several of the regular gaming group, who also participated in the league, decided to play a 2v2 game.  I was allied with Jeff who brought Nurgle Daemons, and Drew was allies with Cameron.  Drew brought Imperial Fists, and Cameron brought Eldar.  Everyone had 1000 points for a total a 2000 per side.

Here is a rough breakdown of the lists.

We roll up Dawn of War deployment and Cloak and Shadows for our mission.

Deployment:
The Forces of Chaos deployed first.  I deployed on the left and Jeff deployed on the right.  We put our fastest units (Herald with Spawn, and Plague Drones) in the center, so they could easily get to most points on the board on turn two. 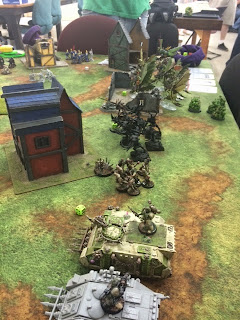 Pay no mind to those Nurgle markings.


Drew deployed across from me with his thunderfire cannon hiding in the back.  Cameron set up a massive Eldar gunline just left of center.  Most everything was clumped up since we didn't have any blasts or templates.

Turn 1:
Our whole army plows ahead, then runs/moves flat out.  I shoot the lascannon and knock a hull point off of the falcon, and the Plague Drones are blessed with the grimoir of true names.

The loyalists shuffle back as much as possible, but are clearly going to get charged next turn. Space marine shooting blows up the rhino for my marines.  Drew also attempts to land his thunderfire cannon on the marines that pop out, but ends up scattering wide and wiping out some nurglings.  The Eldar shoot most everything into the Plague Drones and manage to kill 2-3.  Even the strD weapons roll terribly only scoring a single wound.

Turn 2:
At this point I have three blood points, so I give my army feel no pain and rage/furious charge.  My deep striking bloodletters make it in and land safely on our opponents' side of board.  I am hoping the feel no pain can help keep them alive.  The great unclean one does not arrive from deep strike.

The plague drones move up to charge the wraithguard, and my herald/spawn move to charge the firedragons.  The possessed's rhino moves up and the possessed jump out so that they are hidden between a piece of terrain and the rhino.

Here we are, getting ready to ruin some Eldars' days.


My one lascannon forced a jink on the falcon, and caused another hull point of damage.

In the assault phase we clean house.  I wipe out the firedragons, scoring another blood thithe point, the plague drones take down the wraithguard, and the Daemon Prince wrecks the wave serpent.

With a concerned look of loss Drew and Cameron say, "Ok, just play to the mission."  Drew's Legion of the Dammed (Deathwatch) come in, and land on the center objective.  The weakened falcon flies next to my helbrute to go after an objective, and the space marine scouts move and hope out of their transport to threaten the cultists.  Other than those two units things just shuffle around.  Drew has his space marine squad sneaking around my flank, but they don't have anything other than bolters, so I'm not worried about them.  My bloodletters got taken down to two models.  I think they were shot up by the eldar, but I don't remember.

At this point I stopped paying attention to the Eldar.  Jeff said he could handle things, and most of my units were engaged with Drew's army.  Drew's lascannons blow up my rhino since there are no other decent targets, and I get another blood point.  The Thunderfire cannon and Legion of the Damned kill a few marines, but the feel no pain reduces my losses.    His scouts try to shoot my cultists off of my objective, but fail to do so thanks to feel no pain, so they have to charge.  In combat he takes me down to two cultists, but I do a few wounds in return.  I lose combat, fail my moral check, and am sacrificed to the blood god.  Blood point!

Turn 3:
There must have been a unit I forgot about because turn 3 I had 5 blood tithe points and I summoned more bloodletters and continued to give my army feel no pain.

The new bloodletters landed near his thunderfire cannon.  Jeff's Great Unclean One landed on point thanks to the icon on the plague drones.  The Eldar are having a bad time.

My possessed move up to charge the devastators as well as the two remaining bloodletters from my originally purchased squad.  The herald and spawn also move to charge the Legioned of the damned.  My Helbrute shoots and blows up the falcon.

The two original bloodletters fail to make it to close combat, but soak up the overwatch shots, and the the possessed cause enough wounds to make the devastators break and flee off the board.  A large melee in the center of the board ensues when my herald and spawn charge the Legion of the Damned.  We do a few wounds to each other, but since both sides are fearless we stay locked in combat. 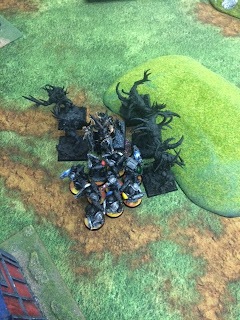 Under all of that there is an objective.

I think the Plague drones became locked in combat with the farseer and dire avengers.

Things are starting to look fairly sparse for the loyalists.  The only thing that is in LOS for the Eldar is the Great Unclean One

The marines hop out of their transport and sit with the scouts on my back objective where the culitsts once were.  The speeder transport flies over to my hellbrute to claim it's objective.  Drew shoots his thunderfire cannon, scouts, and marines at my chaos marines and reduces the squad to two models.

"Just play to the mission."

Turn 4:
Once again I have managed to get up to 5 blood tithe points (I'm sure there were things happening in game that I forgot to mention), so I summon another squad of bloodletters and give my army feel no pain.  The new unit lands in my backfield to help support the dwindling chaos marines.

I move bloodletters up to charge Drew's Thunderfire cannon, and the possessed towards the Eldar to help support the daemons.  The Herald and spawn remain locked in combat, and the two remaining chaos marines move to charge range of the two scouts.

The helbrute blows up the speeder in the shooting phase.

My bloodletters kill the thunderfire cannon, and the chaos marines kill the scouts.

All of a sudden there aren't any marines left.

Drew moves his remaining rhino up on to an objective and leaves the marines to keep line breaker.  My two remaining marines may have died to bolter fire, their deaths were insignificant.  More importantly the herald and spawn finally took down their foes and were free to get the point for the objective.  Jeff also finishes off the rest of the Eldar.

We decide to call it here since things are getting late.  The forces of order have 9 points and chaos has 11.  CHAOS VICTORY!!!

Post Game Thoughts:
I was extremely worried about our complete lack of shooting, but the overwhelming force of melee units made up for it.  We would have had a much more difficult time against a mechanized force.

This was the most success I have had with possessed.  The combination of rage and furious charge was devastating.  Five models can do quite a bit of damage when they each have four str 6 attacks.  Hiding behind the rhino was key to making sure they arrived intact.

The lack of objective secured did make a difference, and made it much more difficult to actually play the mission.  On the other hand the blood tithe table was amazing and much of my success was due to having feel no pain every turn after turn 1.

In retrospect I probably should have broken the herald away from the spawn when they went for legion of the damned.  He was an absolute beast in close combat, but the 3++ save slowed him down.

This was an incredibly fun army to play; I am looking forward to more games with them.