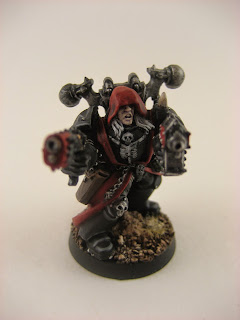 Today is a glorious day for Chaos.  Formations have been spotted for the Black Legion supplement.

Right now this information that looks incomplete.  There doesn't seem to be any 'decurion' style connection between these formations.  Hopefully more information will be revealed soon.

As I go through these formations I will be working from the bottom up (according to the link).

I would suspect that this will end up being the main formation as it has a bit of everything.  The best part though, there isn't a 'you must take at least one squad of unit X'.  You aren't forced to buy any one unit here.  I could bring possessed if I wanted to, but I do have the option of taking terminators instead.  The 'roll twice and pick' is nice, but even with the best options I don't think this is going to make much difference.  At the worst, it will mean that my plague marine sergeant isn't going to end up rolling feel no pain.  On a personal note, I am excited because I can field this formation with my Fallen Angels (Black Legion) army, without having to buy any new units.


The Chosen of Abbadon:
1-4 Chaos Warlords or Sorcerers
1 unit of Chosen or Terminators for each Warlord or Sorcerer

Each Warlord or Sorcerer is attached to the unit and may not leave.  The Warlord and Sorcerer get a free roll on the Chaos Boon Table (re-rolling spawn and daemon prince results)  Each unit is fearless.

This is a cool formation.   It seems very reminiscent of old school chaos armies.  I would take a couple of sorcerers attached to terminators, and deep strike in my units for some back field summoning.  You could also make an army of terminators; if your black heard desires.

Once per game, any turn after turn one you may run and charge in the same turn.  Where I come from, we call that a WAAAAGH!!!  If a unit rolls 8" or more for it's charge distance, then it gets +1 str until the end of the turn.  All units must have a mark of Khorne, and get it for FREE.

Slightly faster units, with free marks of Khorne, and +1 STR 42% of the time?  Yes, please!  This is a solid formation, nothing ground breaking, but solid.  Berzerkers are going to be hitting at strength 6 on the charge when they get the bonus.  Giving your Berzerker champion a power maul is going to give him a decent chance of munching vehicles.


Daemon Engine Pack:
1 Warpsmith
2 Forgefiends or Maulerfiends (in any combination)

This is the clear winner here.  The thought of 8 strength 8 shots, at BS 5, with daemonforge is making me drool.  Running some quick numbers, a forgefiend with two hades autocannons would have a 91% chance of downing an AV 12 vehicles with 3 hull points and no cover.  This is now a serious contender for an allied formation.

Shroud of Deceit is a new warp charge 3 psychic power that lets you choose a non-vehicle enemy unit and shoot with it during your shooting phase.  Only one model in the formation can use the power per turn, but for each sorcerer within 12" of the caster you get an additional warp charge that can only be used on this power.

Old school 'Puppet Master'.  This should be fun.  As far as I can tell, the sorcerers aren't a unit, so you get a bit more protection by attaching them to other units.  Keep a few in rhinos and one on a bike, and you are set to cause some trouble.

Possessed gain +1 Initiative, +1 WS, and Rending.  If they are not within 18" of the Daemon Prince then they must pass a leadership check or be forced to only move D6 inches in the movement phase.

Possessed got a bit better, but this doesn't take care of any of the issues that possessed have.  I am going to pass here.


There isn't anything here that is going to bring chaos up to a top tier army, but a few of the formations are going to be a solid addition to the chaos arsenal.  I would expect to see several of these formations start showing up in daemonkin and renegade armies.

When the daemon formations came out, I complained that the formations were bloated and uninteresting.  I have no such complaints here.  These formations are trim enough to use in smaller armies.  My Black Legion force barely scrapes 1500 points and I have no issues using the main formation.  These formations also have quite a bit of flavor, and can add quite a bit of variety to a standard Chaos Space Marine list.  I am hoping that more information is revealed soon, but even with these options there are some good choices.
Posted by Andrew at 2:35 PM