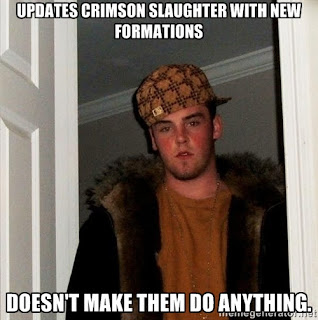 Crimson Slaughter formations have been spotted!  It must be Christmas for Chaos!  This time around though, we ended up with a pair of lumpy socks...


Here are the formations:


Cult of the Slaughterer:
1 Dark Apostle
2-8 Units of Cultists

Units of Cultists within 9" of the Dark Apostle are leadership 10.  Any unit of Cultists that has lost models regains d6 lost models at the beginning of the movement phase.

This is really cool.  Hordes of undying cultists sounds like a fun concept for an army.  It was also theorized by one of our readers (Rose Stenborg) that this could be combined with Typhus' zombies for a truly unstoppable wall of bodies.  Since Typhus' entry specifies "army" and not "detachment", this might actually work.

The Dark Apostle can give every unit in this formation Zealot and Feel No Pain instead of shooting.

A solid choice if you were already planning on taking these units.

Your Chaos Lord is a level 1 psyker knowing prescience.

Roll two dice at the beginning of the game.  The first time your opponent rolls EXACTLY two dice and they match this result, then a unit of daemons is summoned.  Roll a d6, 1-3 summons a unit of horrors, 4-5 summon 3 screamers or 3 flamers, 6 summons a Herald of Tzeentch or a Lord of Change.

The chances of a single roll matching your roll is 5.09%.  Rolls that have two different numbers will be twice as likely as doubles.  This may seem unlikely, but you only need 14 rolls to have above a 50% chance of this happening.  Keep in mind that every unit in your army causes fear, and forcing all of those leadership checks will add up fast.

When I ran Crimson Slaughter, this was a common combo.  The sorcerer becomes possessed, and they try to flank my opponent while summoning as much as possible.

The Ravagers:
1 Unit of Possessed
1 Unit of Chosen

If the chosen champion is alive, then one of the two units can re-roll failed hits.


The Red Onslaught
One of each of the previously listed formations

The catch with this formation is that units can be counted as being a part of more than one formation and gain all special rules associated with each formation they are a part of.  If I have counted correctly here would be the minimum requirements for this formation:

Any time a unit of Possessed dies on a 4+ it enters ongoing reserves and must deep strike into play.  New units do not gain any special rules from the formations that they were previously associated with.  (I think this also means that new units can't get re-summoned a second or third time)  Your opponent also subtracts 1 from their leadership.

The only possible way that I could see to play this formation would be to focus on reducing the enemy's leadership. If this were combined with the Nurgle daemon artifact that reduces enemy leadership you could force -3 to anyone within 12" of your army.  Telepathy powers would become very powerful


Once again we don't see a version of the decurion detachment.  The Red Onslaught includes one of each formation, but doesn't include any options to take other units like obliterators.  Who knows, there might be more that we are currently missing.  I am interested to see if there are any changes to the Crimson Slaughter artifacts.  The current incarnation of the Crozius of the Dark Covenant seems to have been invalidated by the formation rules.