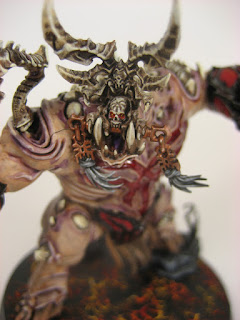 I have been hard at work painting and converting models from the Age of Sigmar starter set over the past few weeks.  Here are my results.

Since I already have a solid army I wanted to take my time and paint things as well as I could.

The scheme for my bloodletters is leftover from my early daemon army.  I like the fire/lava as the overall theme for the army.  With the bases, I wanted to try out the lava base tutorial that Games Workshop put out as part of their advent calendar. 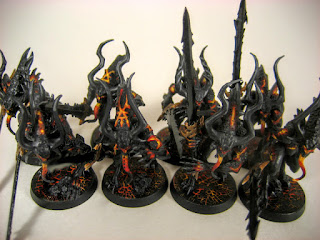 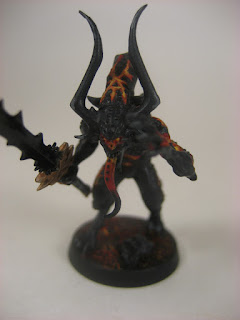 The results looked great.  I was incredibly impressed, but this style of base is, by far, the most labor intensive process that I have ever done.  These bases aren't for the faint of heart.

For the daemonic weapons and armor I decided to have the main armor an obsidian black with brass edges.  This is offset by having the mortals' armor be red with obsidian edges.  The mortals will also have helmets in the same style (obsidian with brass) as the daemons.  Essentially I want the mortals to be imitating the daemons, but can't 'earn' their black armor until they have reached daemonhood.

Painting the cultists was a lot of fun.  There is quite a bit of detail on these models, and they turned out fantastic.  These models are also huge.  Each of the cultists are as tall as a space marine. 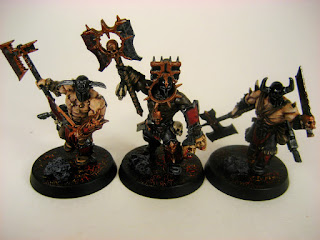 Do you even lift bro? 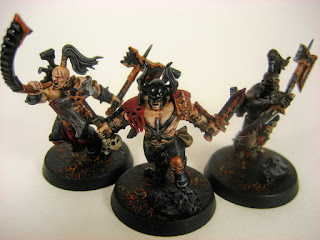 Let's pose like we are actually moving away from that back objective. 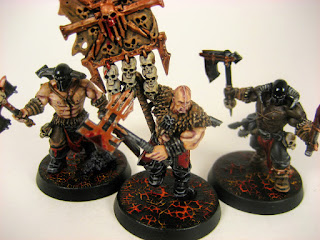 This was my first time painting non-white skin and I was pleased with the results.  Two years ago I avoided painting any skin like the plague, and now it is one of the areas that I feel most comfortable.  So far I have only painted nine of the cultists, but I will begin work on the second batch soon.  I think the next group is going to have more pistol conversions instead of the 'lasgun on the back' conversions.

When I began working on my helbrute conversion I wanted to paint in the style of the daemons with black skin and bits of lava showing through.  I painted it to completion, but it didn't look good.  After much frustration, I stripped the paint off (in only a few hours thanks to my jewelry cleaner) and started over.  Now that it is completed, I know that I made the right decision.  It looks much better in this style. 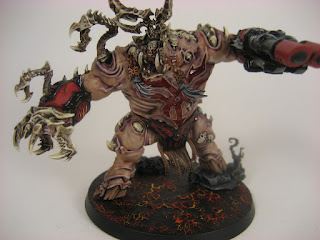 I'm angry because I have a tiny head. 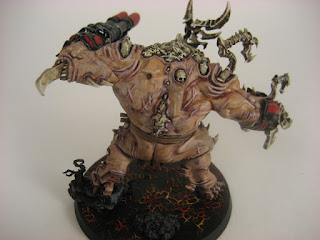 I can't tell if the skulls are being consumed by the flesh, or popping out. 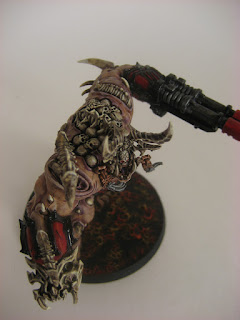 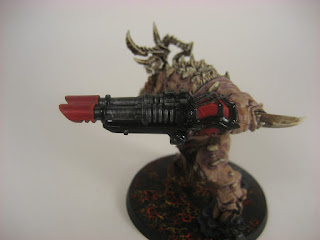 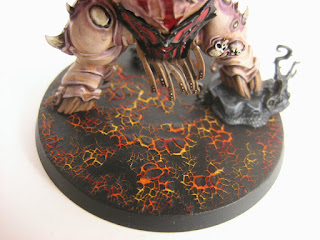 I still have a good number of Khorne guys left from the box set, and I am working to get everything else assembled.  The unfortunate thing about this style of base is that I can't put the models on the bases until all of the painting is done.

Stay tuned!  I have another painting update coming this week, and this one model comes straight from my metal heart.