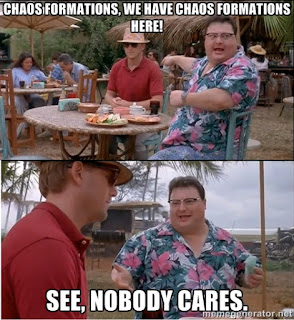 The Daemon Engine Pack is one of the leaked formations from the updated Black Legion codex.  It stands out as a very competitive option, and today I am taking a look at how it stacks up against an Imperial Knight.

First off, the pack consists of two maulerfiends or forgefiends and a Warpsmith.  Each turn, at the beginning of the shooting phase, one of the daemon engines can use the Warpsmith's weapon skill and ballistic skill.  The deamon engine has to be within 12" of the Warpsmith, but that isn't too big of a deal.  One other nice thing is that the only model that is required to take Veterans of the Long War is the Warpsmith, so the Black Legion 'tax' is relatively minimal.

The main advantage of this formation is that the ability is declared at the exact same time as an opponent must declare the facing of a knight's ion shield.  When two things happen simultaneously the player of the current turn, you, get to decide the order.  You can make your opponent choose the direction of their shield first, and then decide where you want the bonus ballistic skill to go.

As a result, if you have two Forgefiends in two different shooting arcs on a knight you can always ensure that your bonus ballistic skill will avoid the shield.  Combined with the daemonforge ability, this formation is going to start putting out a lot of damage.

Here is the information for two Forgefiends with hades autocannons shooting a knight.  One of them fires at normal ballistic skill in the arc with the ion shield.  The other shoots at BS 5, with daemonforge, and avoids the ion shield.

With one turn of shooting we find the following:

I wouldn't expect to down an Imperial Knight in a single turn, but we are clearly starting to put out some hurt.  Now let's see what happens when we combine the results of two turns worth of shooting.

Now we are thinking with portals.  We are starting to provide a serious threat to an Imperial Knight.

Admittedly, this is an idealized situation.  Cover is not taken into account, and I assume that you can get into two firing arc for two successive turns.  Even if you can get into two firing arcs for two successive turns there are a few issues.  If your opponent is clever, then they will face their ion shield to the same forgefiend both turns.  This will mean that the second forgefiend won't get to use their daemonforge ability without hitting a shield, and all of this assumes that both forgefiends survive, and don't have any weapons destroyed.

If I were allying this formation into a Khorne Daemonkin army, then I would probably have the Warpsmith run with the possessed.  I don't expect them to do anything anyway, so they might as well babysit the Warpsmith.

I don't expect this formation to push Chaos Marines to the forefront of the tournament scene, but we now have a new solid option.  Combined with melta bikes, deep striking obliterators, or combi-melta terminators Chaos Marines are getting better at taking down big vehicles.  I would expect to see this formation regularly in tournament lists.
Posted by Andrew at 9:30 AM