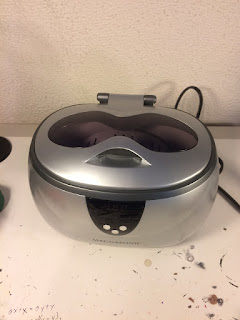 Many of my models are repurposed models from second and third edition.  Over the years I have tried a variety of techniques to removed paint from both plastic and metal models. The most common method is soaking your models in Simple Green or Purple Power for several days and then going at them with a toothbrush and warm water.  Today I have a new technique for anyone wishing to expedite the process.

Recently one of my friend bought me a jewelry cleaner because he had read somewhere that they can be used to strip paint off models. (He may or may not be trying to get me to repaint his ebay army.)  I gave it a whirl and here is what I found:

Usability:
The interface is relatively simple; 'Set Time', 'Start', and 'Stop' are the only buttons.  With this being designed for jewelry it can only be set to run at a maximum of eight minutes at a time.  This is a bit of an issue since you have to start the cycle over again every eight minutes.  When I ran my tests I just did so as I was painting, but it would be really nice to be able to set it for a few hours and leave.

Cleaning is relatively easy since the inside is metal.  I was able to rinse out and wipe out the inside with relative ease.

Since this is designed for cleaning jewelry the container is relatively small.  You probably wouldn't be able to put more than half a dozen models in it at any given time.

Test One: Water and Soap
The user manual recommended simply using water and soap to clean jewelry, so I started here.  After a few times through the cycle there was some residue in the water, but it was probably just dust and dirt off of the 15 year old models.  I didn't expect much from this, so I moved on.

Test Two: Water and Simple Green
Normally I use pure simple green, but here I wanted to ease into things.  While working on chores around the house I ran the cycle about 20 times over the course of four hours.  When I opened the lid, none of the paint had come off.  Initially I was disappointed and ready to call the experiment a failure.  Then I decided to go at the two models with a toothbrush, just to see what would happen, and the paint started to come right off.  For comparison, normally it would take at least two days to achieve this same effect. The jewelry cleaner drastically expedited the process.  I returned the models to the liquid and ran things a few more times to get the last bits of paint.

Test Three: Pure Simple Green
It is a bit unfair to compare this test to the second test since the models sat in pure simple green overnight.  After 24 hours in simple green and about 10 cycles the paint just about fell off of the metal models.  The plastic models got down to their base coat, but I had a hard time working at the base coat of paint.  I will keep running test and try to get once closer to the second test.


Overall purchasing a jewelry cleaner specifically for the purpose of cleaning models isn't recommended.  The container is too small, it doesn't run for long enough on its own, and the same effect can be achieved with just a little more patience.  People who buy mostly used models should consider looking into this, but I would try to find a model with a longer timer and larger capacity.  If you, or your loved one, happened to be in the market for a jewelry anyway, then this is an added benefit.


Right now I have about 20 guardsmen, two Rapier Laser Destroyers, and a flyer base left to paint.   Once these are done I will have my 'standard 1850 list' completely painted.  I have been itching to start a Khorne: Daemonkin army, and hopefully I can get these projects done soon.
Posted by Andrew at 9:30 AM