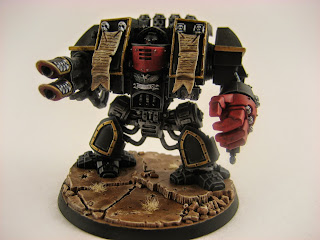 One of the most common questions I get is, "In a fight between this unit and that unit, which one is going to win?"  I did some extensive calculations when I paired an imperial knight vs a bloodthirster, but I want to make this a more regularly featured type of article.  So, I want to introduce you to "Brawl!", where I pair of two units and see who comes out on top.  First up Dreadnought vs Daemon Prince

Note: I am not delving into the world of psychics for this article.  That is a whole different can of worms that adds too many extra variables.

Not super exciting.  Looks like both units are going to try and wear the other one down.  Let's give these units some upgrades.

Summary:
Most of the time a dreadnought is going to beat a daemon prince in combat.  Daemon Princes are generally going to be a better unit, and you are more likely to see them on the battlefield.  Don't be overly aggressive with your daemon princes if you opponent has a dreadnought.  A 'low tier' unit, such as a dread can still put the hurt on your 300 point monstrous creature.  Don't get taken by surprise.  I have won games because people have underestimated my dreadnought and charged it with a daemon prince.