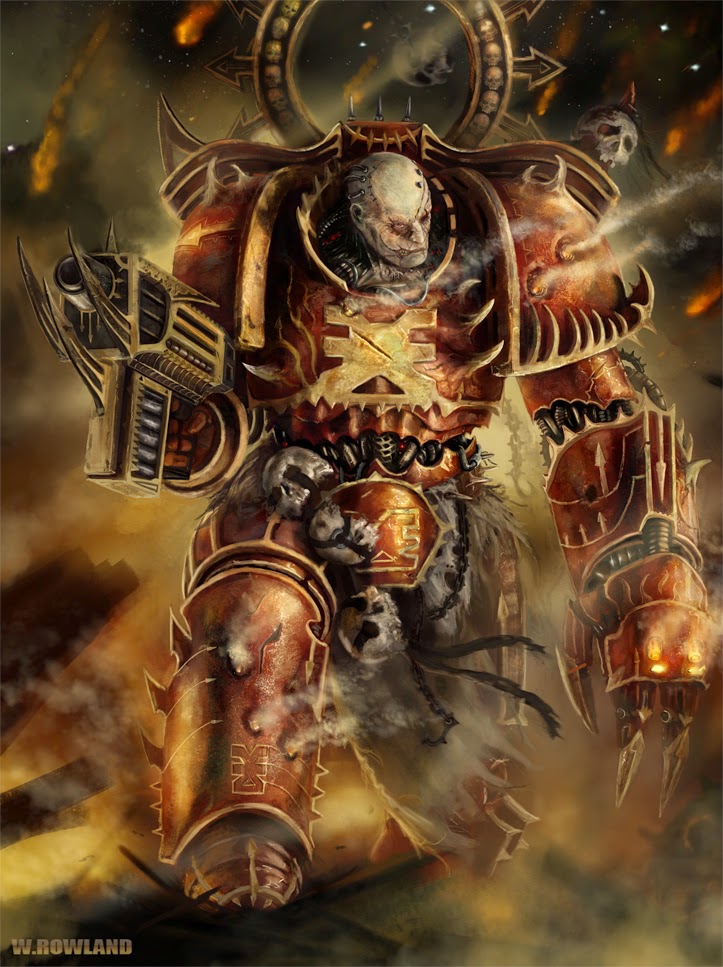 I hope that this codex is a snapshot of things to come.  The combination of a unique detachment with multiple formations adds an incredible amount of flavor to an army.  I want this same kind of treatment for the armies I actually play.

This is your main formation.  It has the standard re-roll your warlord trait as well as a couple other of goodies.  Blood Sacrifice lets you destroy a cultist unit when they fail a moral check, and Boon of Khorne gives you a free item of equal or lesser value when you get something from the blood tithe table.

People may be turned away by the mandatory squad of possessed, but the benefits of this formation far outweigh the possessed tax.  You are more or less getting double the value of your blood points.

If a unit in this formation is outnumbered in close combat then every model gets +1 attack.

These guys are generally run in small squads, so their bonus should be active most of the time.  As I have previously stated, many people are not fans of either of these units, but I think they work in the context of the army.

+1 strength on hammer of wrath and vector strike

The bonus is kind of meh, but if you are taking these units it probably isn't for the bonus.

Let's take two of the best units and make them better.  Yes, please!

Everyone gets counterattack, your HQ can re-roll their reserve roll, and your other units in this formation don't scatter within 6" of your HQ (even on the turn he comes in)!  Oh, and your opponent is -2 on fear checks.

This is an amazing formation.  If I were wanting to ally Khorne Daemons this is the formation I would take.  Anything that makes deep striking more reliable is going to be a huge benefit.

Blood Host Detachment:
This is your special force organization.  For each slaughter cult you can include one Lord of Slaughter (Any bloodthirster or Lord of Skulls) and up to EIGHT formations of any combination!  Included in this is the 'War Engines' section which is basically just all of the daemonic engines plus helbrutes.  So if you want to run one Slaughtercult with eight soulgrinders you have that freedom.

The benefit to running this detachment is that you get an additional blood tithe point per turn.  Combined with the benefit of the slaughtercult this is a pretty big bonus.  When I envision the way a game would play out I suspect that it is more beneficial to go second.  You aren't going to be killing much with your shooting, so you aren't going to rack up many (any) blood points before the start of your second turn.  If your opponent kills 1-2 units, then all of a sudden your whole army is looking at some serious buffs by the time they charge into combat on turn two.


The Chaos Lord runs with the terminators in the landraider. The landraider and soulgrinder act as the anvil for the army while the two squads of bloodcrushers, chaos marines and deep striking bloodlettersact as the hammer.  The anvil deploys in the center of the board and the hammer deploys on one of the two flanks.  The Helbrute plays in the midfield/backfield going after objectives, and the possessed go towards your opponent's objectives.

Instead of the brazen onslaught you could take the gorepack detachment and put the Chaos lord on a juggernaught.  If you did this, it would probably be a good idea to bring more shooting to balance out the loss of the landraider.  I usually try and have 1/3rd of my points able to shoot on turn 1.

As I was writing this list I kept finding more and more that I wanted to add.  No matter the point level I think this will always be an issue.  I also think that Khorne Daemonkin are going to be better at higher point levels.  Higher points mean more units which mean more death and more blood tithe points.  When you spend your bloodpoints on army wide buffs it will affect more units and, as a result, cause more death.

What are your thoughts?  Those of you who are dedicated to khorne, I want to hear how your games go.  I will probably proxy out an army or two, but I may not have the time for a while.  If you all have ideas or discoveries be sure to share them with the rest of us.
Posted by Andrew at 8:18 AM