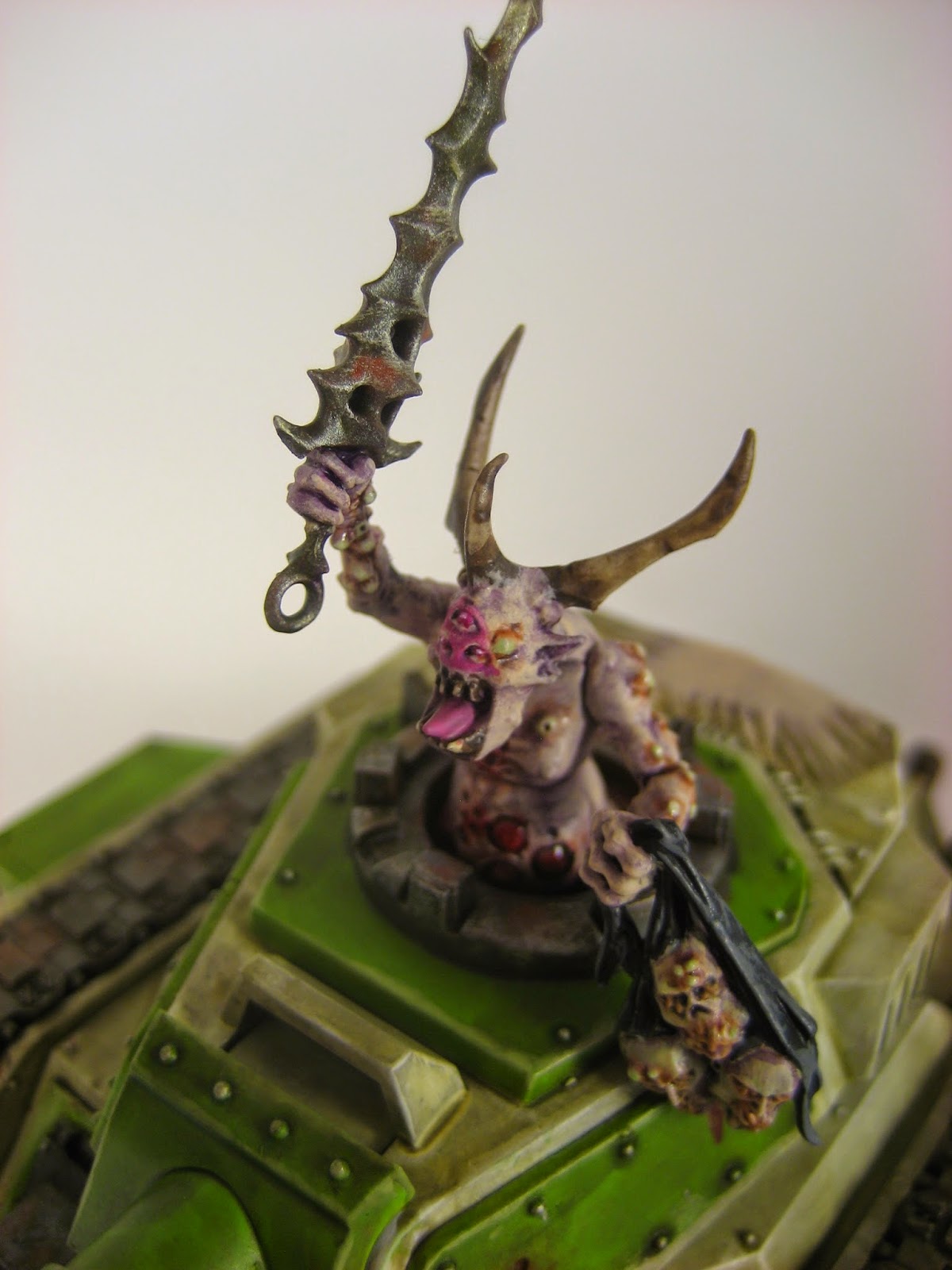 Wednesday night marked the start of my local gaming store's semi-annual league.  This is always a ton of fun and a great way to learn a new army because of the sheer volume of low point games.

This time around we are only running 850 point games on a 4'x5' board.  Half of the games are maelstrom, but all of the missions, deployment, terrain, and opponents are predetermined.  Everyone will play on every table, but not everyone will play every opponent.

*Edit* The format for our league is similar to most sports.  We have six weeks of regular season games and are then ranked and bracketed into a single elimination tournament.  Prizes are given to both the regular season champion as well as the tournament champion. */Edit*

I brought my Astra Militarium, run as traitor guard.  Forge world was allowed this time around, for the first time, but since I don't own a copy of IA-13 I couldn't use the proper Traitor Legion rules.  Looks like my friendly local gaming store is starting to loosen up with what is allowed.

This game was rough, but I learned quickly not to place anything in reserves.  The games are so fast (1 hour timed), that after some bad rolling, my hellhound didn't come onto the board until about 3 minutes remaining. 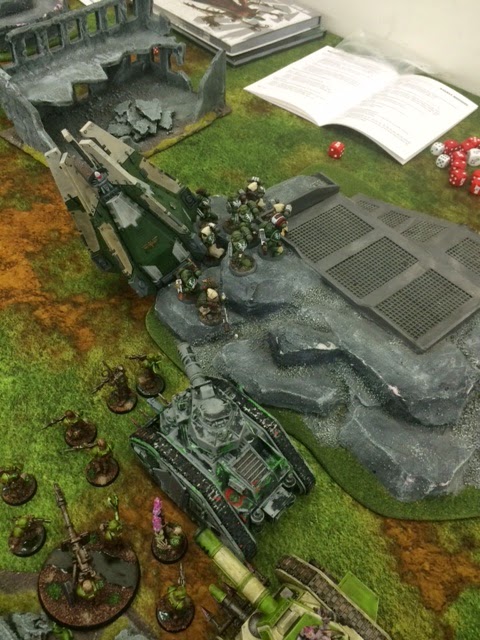 
I had a lot of bad rolling, but the melta drop pod took out my regular leman russ after two turns.  The second marine squad tore through the guardsmen like butter.  I did inflict significant casualties, but with so few kill points he easily won.

Lessons learned:
Don't put anything in reserves (for these fast games).
Terrain can be dangerously restrictive on movement.

Not having faced Harlequins, I didn't know what to expect.  What I didn't expect was for me to destroy everything in a fiery explosion, but that is exactly what happened.

Literally the first time I shot at every vehicle it exploded.  After the first couple I felt bad for my opponent.  He couldn't roll jink saves for anything. 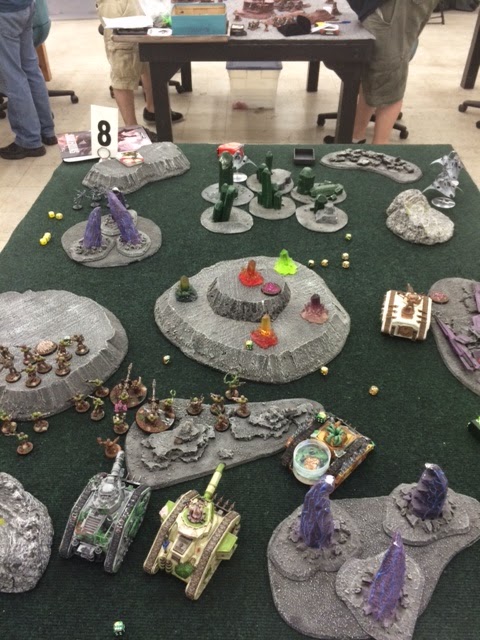 Thirty second before I rained hellfire down on those clowns.


My hellhound immobilized itself turn 1, but still managed to play a significant roll since its shooting was still in range of two of the objectives.  Aside from losing the chimera and my platoon command squad this game was nothing short of a massacre.

To add insult to injury, this was also the first game (ever) where I managed to score the, "Capture all objectives" maelstrom card.

Lessons learned:
Hellhounds can be used defensively when you know your opponent is headed towards you.  This is especially important when you immobilize your hellhound on the first turn of the game.

This board featured tons of LOS blocking terrain, and things were fairly cramped for my tanks.

He landed his drop pod right up in my face next to my objective, and tried to scare me, but the melta-vets took care of him without even breaking a sweat. 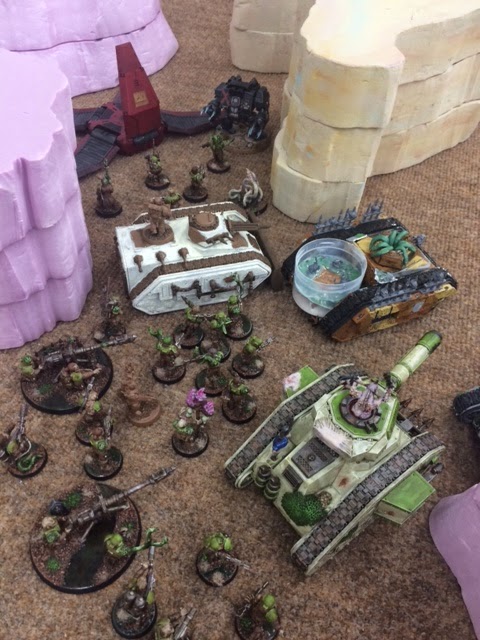 
My hellhound became severely crippled turn two, getting immobilized and losing the main gun.  It did not die, so it remained blocking my leman russes path.  The leman russes rained shots down on his tactical squad, but were unable to take the predator off of his objective.

His librarian and death company landed in the same place as the dreadnought and had a bit more luck.  They took down my chimera, veterans, and platoon command squad before I managed to finish them off.

Lessons learned:
Volumes of lasgun shots can still get the job done.


Thinking into the future:

This was an effective list, but I do want to try out other things.  Right now I am a bit limited by what models I own, but I will probably ally in some daemons later on.

One of the guys in the league is a notorious win at all costs player.  He decided to bring a forgeworld superheavy (what looked like a Felblade) at 850 points.  One of my friends refused to play him last night, and I was thinking of doing the same, but I am also considering making the biggest troll list I can conceive.  If anyone has ideas to make his game miserable (not necessarily win, but just be a giant pain in his ass) I am open to suggestions

I know several readers were interested in Deep Striking Safety: Oval Bases.  I am still working on this problem, and I am happy to say that I finally have something that I should be able to plug into a computer to come up with my results. 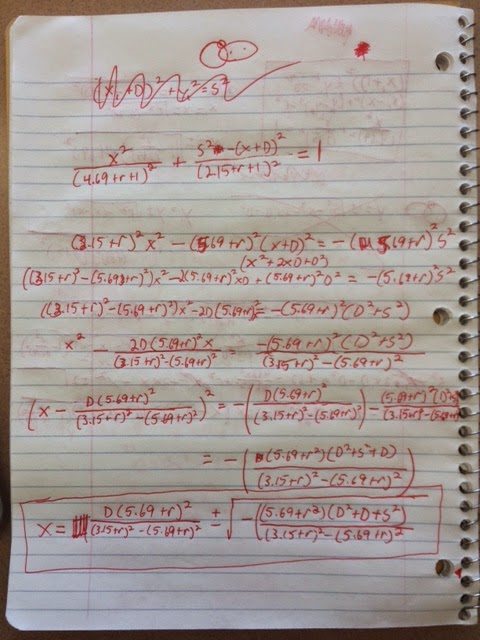 Does someone want to check my work?

There are also about 8-10 similarly filled pages of incorrect work.