League Week 2: The end of the beginning 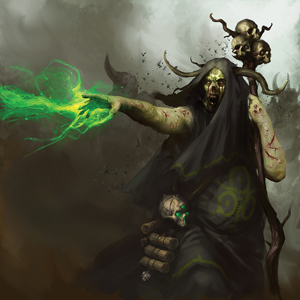 This week I wanted to switch up my list a bit.  Specifically, I wanted to try out the crazy idea of using Wyrdvane Psyker squads to try and summon daemons.  My vision was to have enough lesser daemons summoned to prevent the rest of my army from being charged.  While I was not successful in the way I envisioned, I still managed to be successful overall.

I was playing one of my friends from my regular gaming group.  He decided to bust out his abhumans, so his list looked something like this.

This ended up being a fun game, but unfortunately was decided entirely by luck.  With so little time for our game we barely got into turn three and with this mission we didn't have many objective cards.  Neither of us drew a "Capture objective X", so we were forced to try and score points by killing characters and causing units to fail leadership checks.  I ended up winning, but only because I drew a "Have three units in your deployment zone" card the very last turn of the game.

Two blob squads shooting at each other is boring, but
that is why there are daemonettes in the middle.


My summoning was mildly effective.  I managed to call in a squad of daemonettes on my first turn who drew fire and a charge from his power axe blob.

Overall there wasn't a whole lot that happened in this game.  Some tanks got blown up, guardsmen died, but nothing dramatic.

I wasn't sure what kind of list my opponent was running, but he didn't appear to have any HQ choices, so I assume it was some formation.

I'm not sure what happened to my dice, but all sources of luck died this game.  It took me three turns to destroy any of his vehicles....

The mandrakes set my blob squad on fire during turn 2, and they remained on fire for the rest of the game.  I'm pretty sure half of the squad was lost to soul blaze.

The gun-line that forgot to bring its guns.

I had one turn of hilarity with my Wyrdvane Psykers.  They rolled a perils, got buffed up (went super saiyen), and managed to kill a jetbike in combat.  I played this as only one model in the unit got the buff since normally only one model would be killed by perils.  Only after I charged into combat did I realize that they are WS 2 and S 2.

This game was rough, but there isn't much you can do about bad dice.

Orks: The Spoils of War, Hammer and Anvil

I love playing against Orks.  No matter what happens it always ends up being fun.  Also having played them for so many years; I know what I need to do to win.

Rule number one when fighting against orks: kill the fast things first.  I knew that if I didn't stop the battlewagon and the trukk then I was going to have a bad day.  Fortunately I was able to immobilize the battlwagon and wreck the trukk.  He went first, so they were both halfway to me, but I did increase my chances of survival.

This game I also decided to be more aggressive with my wyrdvane psykers.  Rather than having them sit back and summon I decided to run them forward like madmen.  This worked better than expected because Squad A kept his meganobz on one of the midfield objectives for two turns (rather than charging forward), and Squad B blew up all the grots and distracted the Kans to boot.  I am confident that I would have won either way, but the distraction of the two psyker squads made my victory much easier.

Something about this fight seems one-sided.


By the end his meganobz were about 10 inches from the remnants of my blob squad, so I blocked a narrow passage in the terrain with my chimera.  Sometimes sacrificing a vehicle is worth it to prevent a nasty unit in your back line.

At some point I need to bust out my vendetta.  The model looks too good to keep in its display case.  Maybe next week I will switch out the tank commander for a company command squad.

This weekend my gaming group is getting together for beerhammer.  Empty beer cans become new pieces of terrain, and can be placed at any time.  I have a feeling this is going to get crazy.  I will try to take pictures so I can write up a battle report.  This will be my first try with Khorne Daemonkin.  BEER FOR THE BEER GOD!!!  CANS FOR THE CAN THRONE!!!!
Posted by Andrew at 10:24 AM