League Week 3: The Beginning of the End 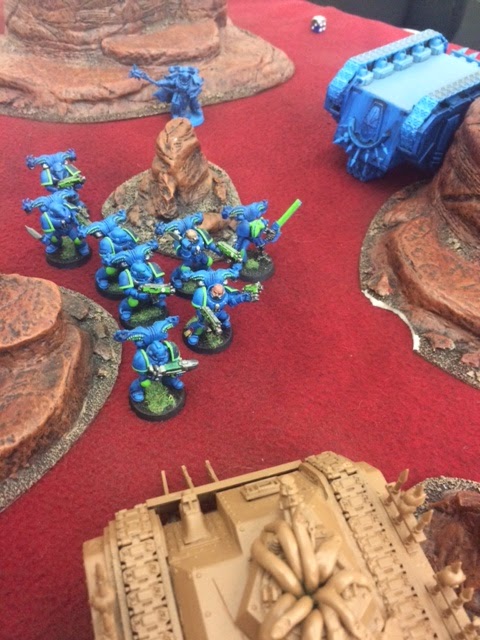 I decided to use the same list I used the first week; swapping back to the hellhound instead of the two squads of wyrdvane psykers.

I was extremely excited about this game.  My opponent was someone who has participated in many leagues, and he always gives me a fun match.  This time around he brought he brand new Alpha Legion army.

The warptalons and obliterators started in reserve.  His havocs started up on a hill, the marines went in the rhino, and the cultists hugged an objective.  Strangely enough his lord sat back near the havocs, but didn't join a squad.

I knew that the deep striking units could cause some serious trouble, so I wrapped my leman russes in my guardsmen and positioned the chimera and hellhound to go towards his objective.

I managed to open up his rhino turn 1, but not much else.  He responded by rolling terribly with his autocannons not doing a single hull point to the hellhound.  The cultists' heavy stubber did kill one guardsman. 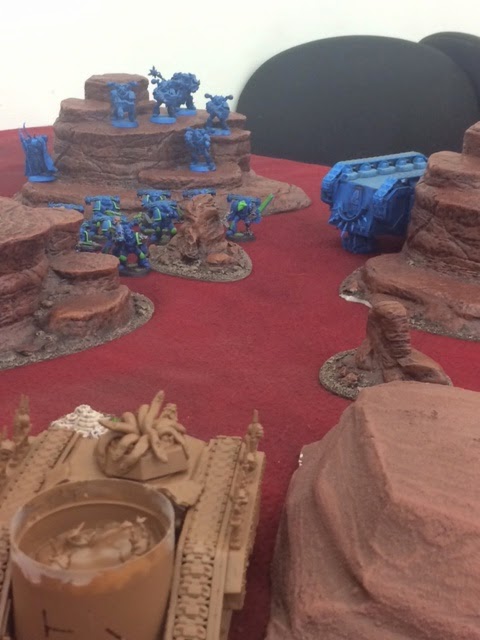 The hellhound prepares to burn some marines.


On turn two my hellhound rushed forward and roasted all four of his autocannons.  My leman russ missed the marines, but my vanquisher instakilled the chaos lord.  His warptalons come in, but scattered decently far away from my blob. The obliterators decided to go get coffee instead of participating this turn.  He charges my helhound with the marines (I think he had lost both special weapons to chimera shooting), and does two hull points while forcing snap shots.

With most of the major threats eliminated I back the chimera up to avoid getting charged (big mistake) and turn my attention towards the warptalons.  I unload everything and take down 4 out of the 5 (damn that invulnerable save).  His obliterators decide to come in and land right next to my tank commander, but only end up removing a single hull point.  The lone warptalon charges my blob squad to get cut down by some seriously impressive overwatch rolling.  His marines move onto the central objective, and with 5 minutes remaining the game ends.

We ended up in a tie, but if things had gone to turn 3 I would have easily won.

His army had a lot of leadership shenanigans, but since my blob was fearless I didn't see any of them in action.

He moved after objectives on turn one; trying to stay out of LOS as much as possible.  He did put two hull points on my helhound, and eliminated all but one member of the platoon command squad.  I scooted my chimera up after an objective, killed a couple of scourges, and opened up one of his venoms.

He finished off the remaining hull point on the hellhound, and killed a few guardsmen.  I responded by killing enough bikes to make the squad break.  Even though they would rally it was still on one of my objective cards. 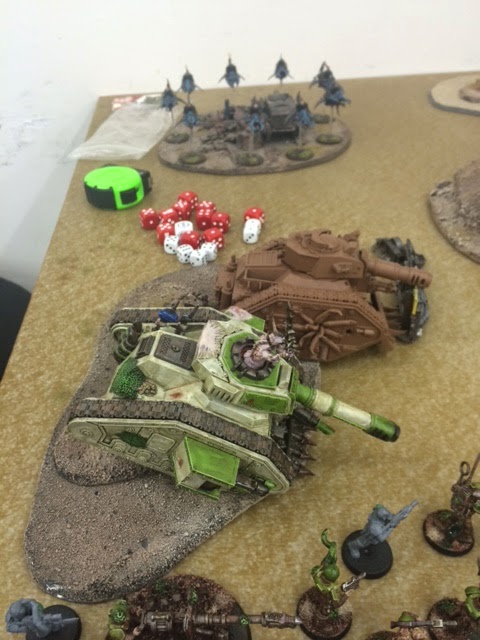 The jetbikes shortly before they ran away.


As expected, the jetbikes turned around, but this meant that they couldn't charge me for another turn.  His Solitaire did some crazy harlequin thing to get a giant pile of attacks and wrecked my leman russ in close combat.  My tank commander opens up the remaining venom, and the warriors inside hid in some terrain on my side of the board.  The blob squad managed to get ignores cover from my psyker and they eliminate more of the jetbikes.

At this point we had 15 min remaining, so we knew this would be the last turn.  The remaining scourge and Solitaire managed to knock two hull points off of my tank commander, but he couldn't finish the job.  I responded to shooting the tank commander at his Death Jester and wiping it off the board.

The game ended and when the final count was in he won 10 to 9.  This was an incredibly fun game.  It was high scoring, neither of us had a cheesy list, and the lead switched back and forth several times.

I also rolled like a CHAMP for deny the witch.  Every turn he attempted to use some blind power on my blob squad, but it didn't go off once.  At one point he had three successes and said, "Alright, this is finally going to happen."  Then I took my five dice and managed to roll three sixes!


This coming week is the last week of regular games.  Next week will be the first night of the single elimination tournament.  I also play the WAAC player this week.
Posted by Andrew at 6:06 AM