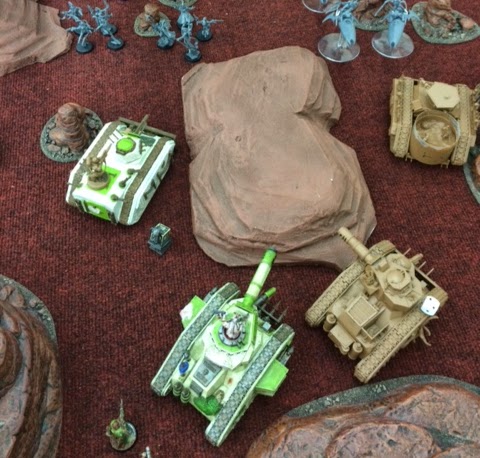 This last week was the final week of the regular season of our league.  This week will start the single elimination tournament.

I played against this opponent week one, but at this point I feel like all I am seeing is Eldar.

I took an early lead in this game by drawing several 'capture objective x' on my side of the board.  From there I started eliminating his mobile units.  I figured I could maintain a lead if he couldn't get anywhere.

His haywire cannons caused me some serious problems, they took out my hellhound first and then went to work on my leman russes.

After exploding my chimera with some fusion pistols he demolished my veterans in close combat. 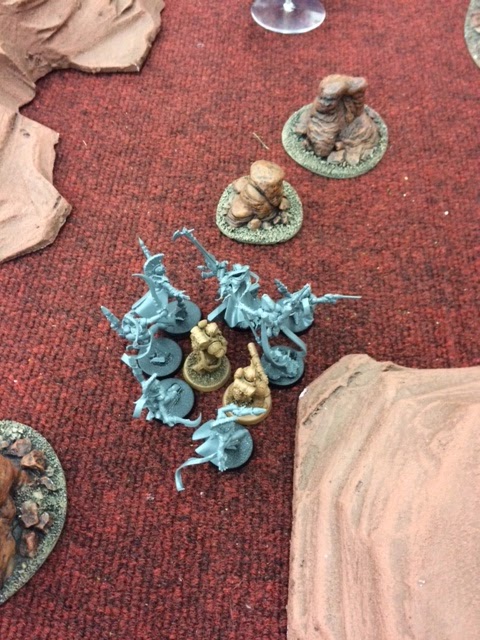 Only two survived the hammer of wrath hits.

In the end we tied.  I thought I had things in the bag, and if my command squad was about an inch closer to my objective then I would have prevented him from capturing it.  Oh well.  Live and learn.

This was the win at all cost player.  His list was the following:


I debated even putting models on the table.  I decided to play him, but I won't make that mistake next week.

Turn 1:
His bikes move up.  I shoot my entire army at him and do 1 wound to his chapter master.

Turn 2:
He splits the warlord and librarian off to be a two man squad (with majority toughness 8 thanks to iron arm).  They charge into my blob squad, and I realize that I literally cannot kill them.

I told him he won and I went to go watch other games. 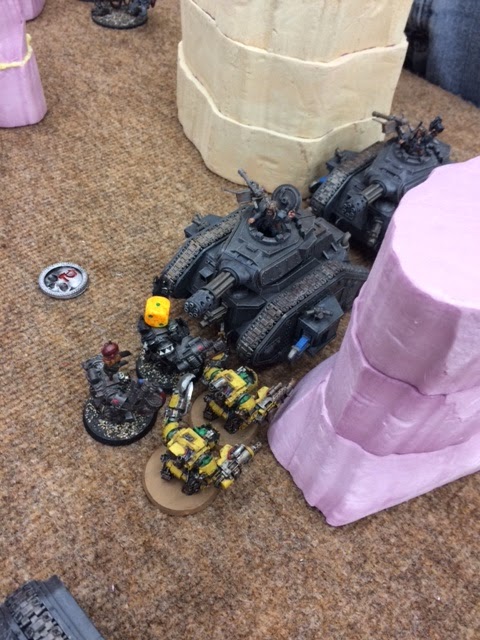 Some meganobz get ready to rip up a few tanks. 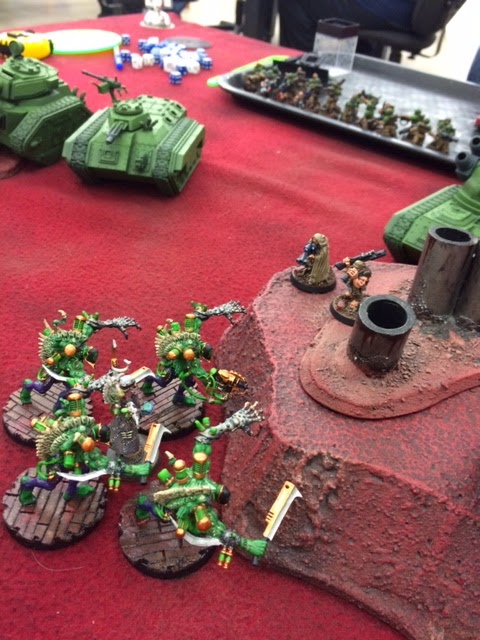 These grotesques want to kill the ratlings, but end up getting wiped by the tanks.

The third game was a challenge match.  The person with the worst record could challenge any opponent.  The league organizer then worked up the rankings until every person had a game.  I was challenged by the Imperial Fists player.

We had three objectives and our maelstrom cards were kept secret from each other.  Each of us had an objective on our side of the board; with one in the middle.  His snipers camped his back objective, and my blob camped mine.

I took out the razorback turn one because it was the only thing that had a chance of hurting my leman russes.  After the razorback was opened up I worked on taking out units that could go after the central objective. 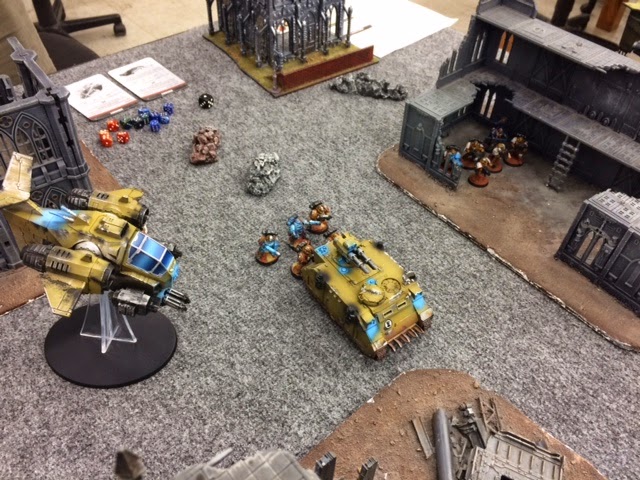 The central objective is just below the camera shot.


He went after the helhound and knocked it down to one hull point, but I went and hid behind some LOS blocking ruins.  In the end the helhound rushed his board edge to score linebreaker.

The stormtalon had a field day.  It came in with a clear view of the side armor of my chimera, and took it out immediately.  After that it flew around killing guardsmen by the handful.  Eventually I got a lucking hit with my vanquisher cannon and knocked it out of the sky.

I ended up winning and my opponent admitted that he thought I was playing with my Chaos Marines when he challenged me. Oops.

This week we begin our single elimination tournament.  The points for the tournament are upped to 1400.  I play my good friend, Drew, (the Astra Militarium player from week 2) for the first game and then the winner of our game plays the WAAC player.  The WAAC player has a bye for the first round, and my friend and I have decided that whoever wins we are going to forfeit the second game.  This means that the WAAC player won't play any games next week.

From the Painting Table:
I have not been painting nearly as often as I want to.  There is only a month to go until the end of the school year, and I am bogged down grading.  As soon as May 22 hits I am going to have a lot more time.

I had primed the helhound, but after a couple of days I noticed that the paint was flaking off of the toxic vat.  Very quickly I realized that the plastic cover from my spray cans (what I used for the vat) weren't meant to be painted.  Once I get a free moment I am going to go back and sand the surface of the tank.  This should hopefully make it abrasive enough to hold onto the paint.

Several of my friends have recently ordered titans from Chinese recasting websites.  I am severely jealous, but even the Chinese knock-offs are expensive.  There is also talk of a massive game of apocalypse for Drew's bachelor party, so I may be at a bit of a disadvantage.