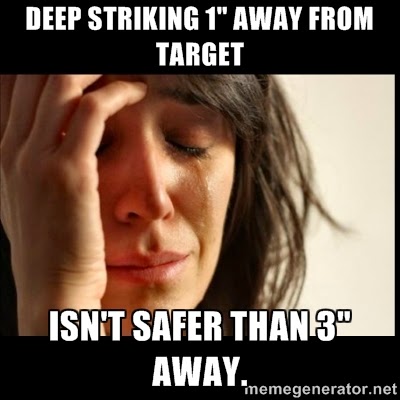 So far I have talked about deep striking against a wall of troops and lone monstrous creatures.  These seem to be the two opposite ends of the spectrum.  This time around I tackle a single ten man infantry squad (not literally).

This biggest issue with approaching a squad of units the same way as I did in the last two posts is that very rarely are any two squads in the same configuration.*

*Note: I did consider trying to do an analysis of squad formations based off of reader submitted pictures, but I realized that I would need better math and programming skills.*

Rather than try and estimate squad spacing and configuration I decided to determine the smallest and largest possible areas a squad of ten models could fill.  This would basically give the probabilities that all squads, regardless of configuration, must be between.

The smallest area for a ten man infantry squad is relatively simple because it is the deep strike formation with which I have become so familiar.

Here are your chances of being safe when your squad is 5 or less models.

And when your squad is 6 or more models.


What we see is that a small 10 man squad does not create a large footprint when all of the models are bunched up; as a result trying to deep strike by them is relatively safe.


Trying to determine the largest area a ten man squad could cover turned out to be a bit trickier than I had originally anticipated.  After a bit of estimating I determined that since a spread out circle takes up the most space, as opposed to a rectangle, then it is probably also the most dangerous for deep striking squads.

Here are the probabilities of being safe next to a fully spread out squad of 10 models when your squad has 5 or less models.


And when your squad is 6 or more models.

With this situation our squad seems to have crossed a threshold where our chances of scattering past the other squad is unlikely.  The result is that we no longer see the increased safety at point blank distances.

Here is how you can use these charts:

The same idea applies when your squad has 6 or more models, but your probabilities must always be between.

My take on this data:

Looking at all of this I think most people's intuitive placement is accurate.  Deep striking a squad 4-6"away from your opponent, while bold, is relatively safe.  If your opponent is spread out even a bit then your chances of scattering past the squad shrink to almost nothing.