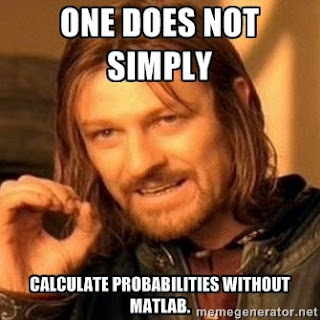 This was by far the most work of any of the warhammer related probabilities to date.  After several rounds of incorrect formulas I started using excel to check my work.  I discovered that my formulas were incorrect (again) and that excel was insufficient to do the work that I needed.  Fortunately I found a free online course for MATLAB.  The past couple of weeks I have been learning how to program in MATLAB, and have come up with some conclusive results.

Deep striking against an oval was complicated for two main reasons: the equations of ovals have more going on than the equations of circles, and the orientation of the oval will affect the probability.

First up we have the probabilities for deep striking on the long end of the oval.  This would be the side of a knight or the back of a maulerfiend.  Remember these are your chances of being safe. 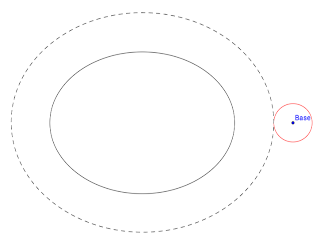 Most of this looks as expected.  Just like when we were deep striking against monstrous creatures a distance of 1" is a bit safer than 2" or 3", but as a whole your safety increases as you get farther away from your target.

As I have mentioned in previous articles the cutoff here is when you add a 6th person to the squad.  Once you add a 6th member to the squad, then you have to start placing models closer to your target.  The probability of being safe decreases, but you can compensate for this my starting your squad back an inch from where you normally would.

Next up we have the probabilities for deep striking on the short end of the oval.  Since this would be on the back of a knight I am guessing that this is what most people are concerned with. 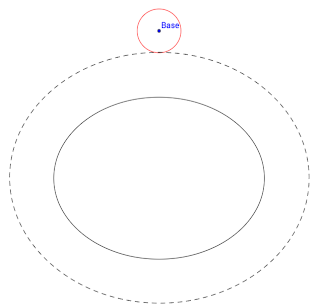 The first thing that is obvious here is that the probabilities for being safe are almost all lower than the previous group.  Even so, the chances of being safe are relatively high.

As usual, I wouldn't deep strike your deathstar 1" away from a knight, for a variety of reasons, but small suicide units are going to successfully land most of the time.

At this point I feel like I have covered all of my basis with probabilities related to deep striking.  Once again I want to open things up to the readers.  Are there probabilities that leave you curious?  Have you wondered how things should turn out in combat?  Let me know, I would be happy to run some calculations for you all.