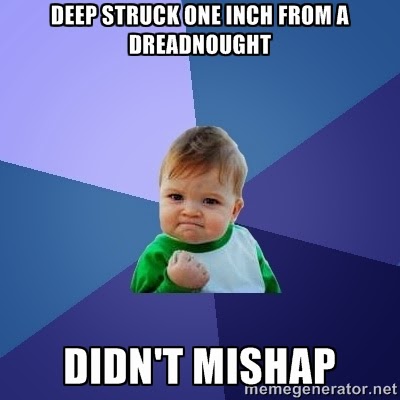 In the previous post we looked at the probabilities when deep striking against a wall of troops.  What we saw was pretty straightforward; the farther you are from your target the less likely you are to mishap.  This time around we are deep striking by a large round base such as a daemon prince or dreadnought, and the results show something interesting.

Once again all of my calculations are done in a vacuum.  The only thing I am concerned about is avoiding one large round base.  In an actual game it is going to be rare that there is a single model of this size far away from everything else.

Last time I also talked about how units of up two five models aren't any less accurate than a unit of one.  We are going to follow the same information here.  I used the law of cosines to find the angles where I would hit a large base when starting a certain distance.  As with last time the red circle is the starting location (in this diagram exactly one inch from the large base), the dotted line represents the one inch radius around the large base, and the other 4 circles represent the angles where I can land for 2, 3, 4, and 5 inches (moving right to left).  If the red circle scatters 6 or more inches then it cannot mishap. 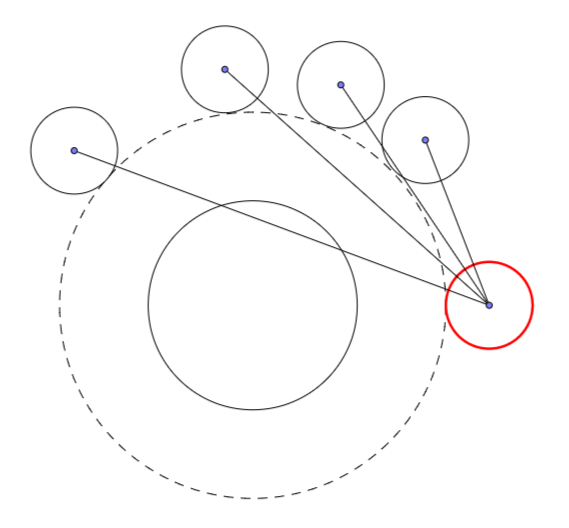 With these angles I combined the chances of rolling that amount with the chances of not rolling a hit.  All of this together gives us this table which represents the chances of being safe when being placed by a large round base.


The first thing we notice is that all of these numbers are very safe (especially compared to the numbers from the last post), but more interesting is the fact that the most dangerous distance is not actually the closest.  Since the chances of scattering each distance are not uniformly distributed (rolling a 2 does not have the same chance of rolling a 7) it is actually more dangerous to try and land 3"-4" away from a large base than anywhere else.

If we think about this it all makes sense.  Putting your model right next to your target means you MUST roll a 2-5 AND scatter within the appropriate angle.  For a bit of perspective a re-rollable 2+ save has a 97.2% chance of success.

When our squad gets above 5 models we must start adding models on to the front.  This isn't quite as simple as when we were facing 'the wall' and I had to run my numbers through excel again in this situation.  Here is what I came up with.

IMPORTANT NOTE: This chart uses the initial distance of the front model not the first model placed.  To incorporate this in your game you would place your first model back about an inch.  If you don't take this into account you will mishap on a hit at 1" away

What we see is that as our squad gets larger it does get more dangerous, but only by a slight amount.  All of our chances are still above 90%

This is a bit safer than the previous squad, but once again everything is pretty safe overall.

If you are going after something on a large round base feel free to deep strike anywhere by them.  Even being right at 1" away your chances of causing a mishap are relatively small.  Most of the time I am deep striking units they are generally suicide squads, but what this shows is that they don't necessarily need to be guaranteed death.  Since our chances of having a mishap are low you could buff up the unit without too much worry.
Posted by Andrew at 9:54 AM