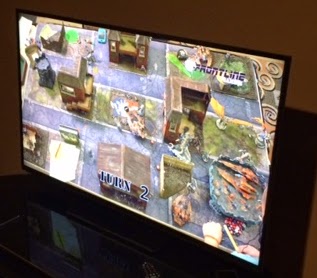 Yesterday was the final day of the Las Vegas Open tournament.  Frontline Gaming decided to stream the matches at the head table, so some of my friends decided to host a watch party complete with pizza, beer, and a whole lot of warhammer.

Review of the Livestream:

The video feed had a good quality picture, with images being clear and crisp.  Some of the camera angles were not always the best, and it became difficult to determine where models were positioned.  Many of the models were inside ruins/buildings, and were unable to be seen by the fixed camera.  There was also a dice camera fixed on a dice tray, so you could see what people were rolling.  Combined with a picture in picture this could have been really awesome, but the camera was sometimes focused on the dice tray for several minutes without any rolling.  The picture in picture was also frustrating because the larger picture would be the dice tray where as the overall picture of the board was smaller.  It probably would have been more effective if these had been reversed. 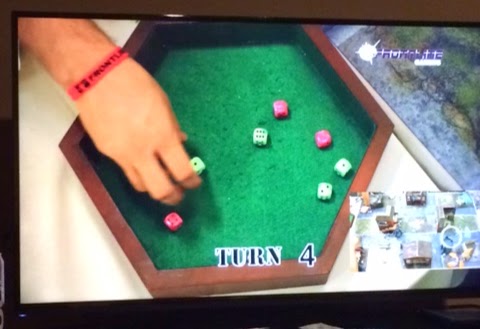 The infamous picture in picture

All of this could have been overlooked if there had been better game commentary; unfortunately it seemed that most of the time the conversation was on on things unrelated to the current game.  The combination of models hidden in terrain and unrelated commentary meant that everyone at our watch party had a hard time determining what was happening throughout the game.  This became frustrating when dice rolls were shown because we had no idea what was being rolled and had to make guesses based on the number of dice.  The two players were wearing microphones, but their sound was so low that it was nearly impossible to hear what they were saying. 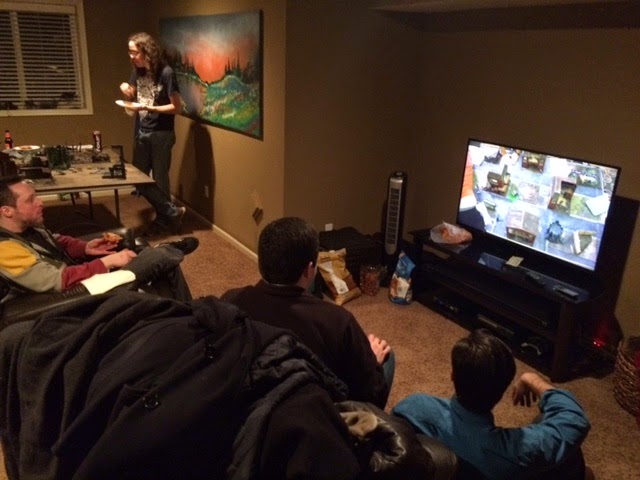 Discussions of the final match while Space Wolves beat on Necrons in the background.


Realistically the overall quality was not particularly good, but with that said I am hoping that Frontline Gaming does this again next year (with some appropriate improvements).  Despite my negative reaction I am very excited for next years event and all of my comments should be taken as constructive criticism.  This event got my whole gaming group excited and brought together some players that had never met.

The moment one of my friends proposed the watch party everyone from our group bought into the idea.  Everyone was immediately and enthusiastically interested.  A few days after the party was proposed I invited my trainee to join, and she was enthusiastic as well.  Finally I played a game with two of my oldest friends on Friday who, due to work schedules, have never had a chance to meet my gaming group.  When I mentioned the idea to them they were also sold. 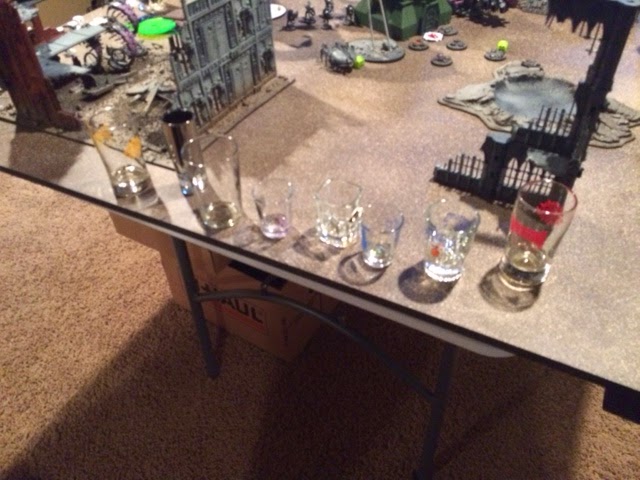 All of the turn two shots.  We decided to do one round for all of the games.


In addition to the final match playing out on the big screen we had set up three tables in the same area.  We had representation from Astra Militarum, Daemons, Space Wolves, Chaos Space Marines, Necrons, and Eldar.  Our Dark Eldar and Tau Players did not bring their armies.  In the spirit of the LVO we had printed off the tournament missions and we were playing those scenarios.  I liked the modified maelstrom missions, and they turned out to be a fun change of pace.

With new people coming together most everyone got to play someone new.  One of my friends is getting back into the hobby and was trying out daemons (borrowing my models and proxy-ing with some second edition Tyranids).  He brought a vicious summoning list that (by the end of the game) had 5 monstrous creatures terrorizing the board.  My recent trainee came along for the fun, but she decided to just watch games and ask questions rather than trying out a large scale game. 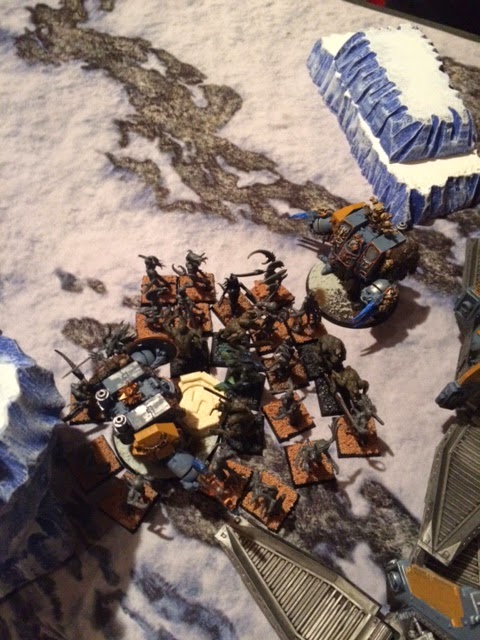 Daemonettes charge into a dreadnought.

I got my first glimpse at the new necrons and they look pretty strong.  I didn't get a chance to play against them, but I saw them wipe out some Astra Militarum, and put some serious hurt on the Space Wolves. 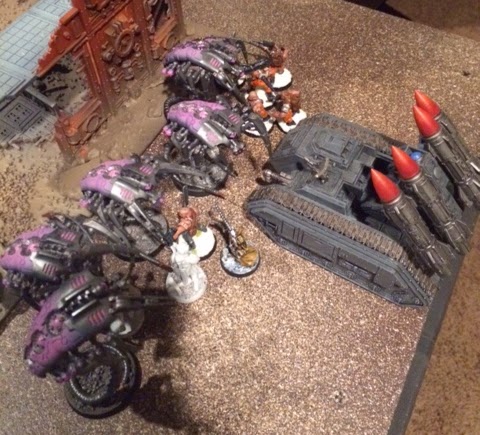 Wraiths move in to eliminate a Manticore. 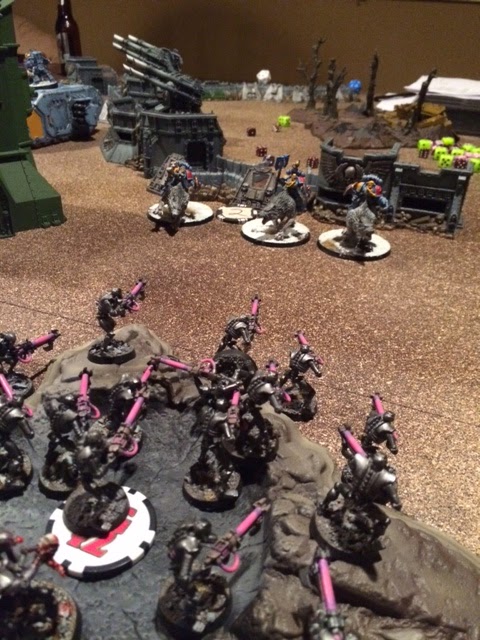 I played an incredibly fun game against Eldar.  On my first turn my mobility became severely crippled.  I lost my only rhino, had my landraider immobilized, and had my bikes run off the board.  The first turn was so rough that I thought I was done for sure.  Once the first turn was over I managed to roll like a champion.  My shooting took down several of his wave serpents, and my Sorcerer and terminators made it across the board unscathed to charge a wraithknight. 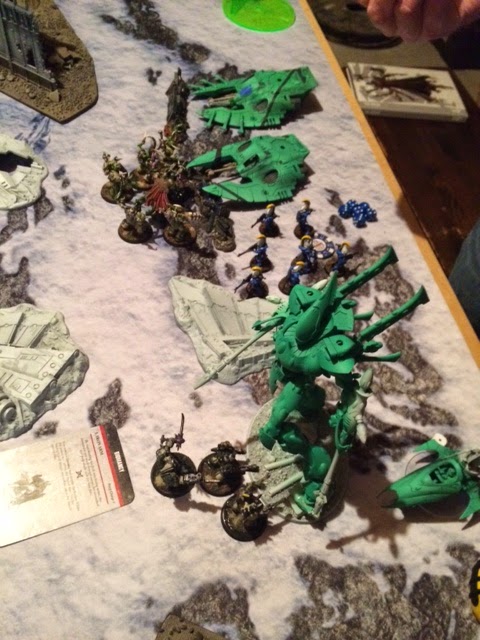 If only I remembered to activate my force weapons.

We called the game early to watch the championship match, but somehow I had managed to knock out all of the Eldar tanks and wipe out the majority of his infantry before the end.  If the game had continued I am certain that Chaos would have been victorious.

Watching the game online was frustrating but the overall idea shows tons of potential.  I think this kind of event lends itself to the 'sport' aspect of tabletop gaming, and I hope that more people support this idea.  Hopefully Frontline Gaming does this again and hopefully the process is refined.  Those of us who can't take off work to go to big tournaments can still feel involved even if the games are halfway across the country.  More than just this one tournament, I hope the idea of live streaming tournaments with commentary takes off.  I think this could be a huge boon to our hobby.