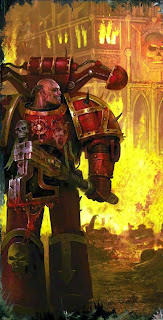 The Traitor's Hate book came out this week and it provides quite a few new options.

The book started leaking last week and if you haven't seen it you can find it  here.

This got an update from last time we saw it.  Now, everything counts as being objective secured and rather than roll twice and pick one for the chaos boon table we have the option to take both results.  Nothing incredible, but there is a lot of flexibility with the units you can take.  Objective secured Nurgle bikes sound pretty great.

Fleet and +3" to the charge makes these guys incredibly fast.  I'm going to need to run some numbers on them making turn two charges.  This could be really good.

Lost and the Damned:
Dark Apostle
4-9 units of cultists

Each time one of the units of cultists is destroyed it goes into ongoing reserves on a roll of a 4+.  These new units gain the outflank special rule and are treated as part of this formation, so they can (potentially) go back into ongoing reserve if they are killed a second time.  The dark apostle's zealot rule affects all lost and the damned units within 6"

This formation is amazing.  Exponentially so when you consider combining this with Typhus zombies.  Expect to see this in competitive chaos lists.

As long as the Warpsmith is alive and on the battlefield you can use the daemonforge ability on each of these units every turn.  One of the vehicles from this formation starts off with a 4+ invuln and becomes a character, if it is killed then all of the other vehicles gain rage.

Meh.  Daemonforge every turn is cool, but not groundbreaking.

Enemy units subtract 1 from their leadership for each heldrake within 12".  Vector strikes on units that are pinned, gone to ground, or falling back take d6 hits rather than just one.

We keep getting more and more tools with leadership shenanigans.  Combining these all together with some Slaanesh powers could be very powerful.

Cult of Destruction:
1-3 Warpsmiths
3-5 Units of Obliterators or Mutilators in any combination

In the movement phase, a warpsmith can target one unit of obliterators or mutilators and have that unit shoot/attack twice in a single turn.  The unit cannot use the same weapon for the two attacks or the weapon from the previous turn, and cannot target a different unit for the subsequent attacks.

This formation is going the be the backbone of many chaos armies.  There is a huge potential for destruction.

Fist of the Gods:
Warpsmith
3-5 Predators, Vidicators, or Land Raiders in any combination

Nothing big at surface level, but now it is a bit easier to get land raiders.  No more fighting for a heavy support slot.  All in all, it is a bandaid on our major problem of getting troops into close combat.

Raptor Talon:
Chaos Lord
3-5 Units of Raptors or Warp Talons in any combination

Units in this formation can charge the turn they arrive from deep strike, but count as making a disordered charge.  Enemy units that are charged by two or more units of raptors from this formation subtract 2 from their leadership until the end of their turn.

As far as I can tell deep striking does not count as using your jump pack for the purposes of movement, so you should be able to re-roll your charge distance and get hammer of wrath.  This formation could do some incredible things.  Combine this with the heldrake formation and you could really run down some enemies.

The Lord or Sorcerer must take terminator armor, but gets it for free.  Pick an enemy unit at the start of the game.  All of the units from this formation have hatred against that unit and can immediately shoot upon landing from deep strike (happening just before interceptor weapons since they would happen at the same time), but you can still do normal shooting in your own shooting phase.  One of the best things about this special shooting is that you can potentially target two different units since only the special shooting has to target the targeted unit.  If the nominated enemy unit is killed then you get to pick a new unit.

Terminators have fallen to the wayside with all of the grav weapons out there, but this looks like a fun formation.  Once again, nothing groundbreaking, but you are going to kick the crap out of one unit at a time.

Units of possessed within 12" of the Demon Prince gain all three mutations rather than a randomized one.

All of a sudden you have S5 marines with 3 attacks and lightning claws striking at initiative 5.  Definitely glass cannons, but with a few land raiders, you could make it into combat.

Shooting from this formation counts as twin linked if it targets something that has been attacked by another model earlier in the shooting phase.  In the movement phase each model of every unit locked in combat with a Lord of Skulls takes a S6 AP4 hit with the ignores cover and soul blaze special rules.

I can't imagine that anyone owns the models for this formation, but the S6 AP4 hit should be standard for a Lord of Skulls even without the formation.

Veterans of the Legion
1-4 Cult Troops

If this is your primary detachment, then you can re-roll your warlord trait.  All units have hatred (armies of the imperium) and any unit that can take Veterans of the Long War can do so for free.  At the start of each turn, one model with 'Champion of Chaos' can roll on the boon table for free.

I love the flexibility of our main detachment, there are a ton of different ways to structure your army, but the benefits for taking it are just not that great.  If you are taking this detachment, then chances are it is because you want to field an army that can't fit into a CAD.

There are two formations that really stand out to me: The Lost and the Damned and The Cult of Destruction.  I combined these with Typhus for a zombie party.

This all comes in at just under 1850 points

The zombies would bubble wrap the obliterators and the knight.  Typhus and the dark apostle would each be in one of the squads of 20, and the two squads of 10 zombies would go after objectives.  The warpsmith would hang out in one squad of obliterators and probably stick close enough to try and repair the knight if necessary.  The zombie squad leader would use the re-roll from the Dark Apostle to attempt to turn themselves into a Daemon Prince or spawn.  Unlikely, but the best option.  This army was sort of the old classic, but with updated formations it got better.

Chaos isn't going to start pushing the upper limits of the tournament scene, but we now have more options that perform (slightly) above where we were.