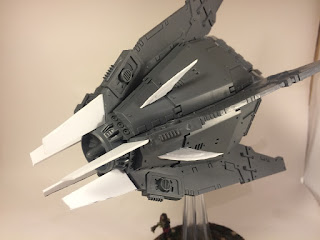 This weekend I got together with one of my longtime friends for an afternoon of assembling, converting, and beer.
Phil and I had planned on getting together last weekend, but things changed slightly when he messed up his leg.  We met up at his house and it was a blast from the past.

My oldest friends started playing 40k around the start of 3rd edition, one summer, when Phil broke his leg.  That whole summer we practically lived at his house playing Goldeneye, Mario Kart, and 40k.  Going back there to build models was nostalgic to say the least.

After months of struggling with Dark Eldar, Phil decided to start a mechanicus army.  He was assembling an Imperial Knight, and this was the first time either of us had seen an unassembled kit.  I have seen knights on the table, and they look good, but the sheer volume of options in a knight kit is amazing.  Phil worked off and on for about five hours and got about halfway through assembly. 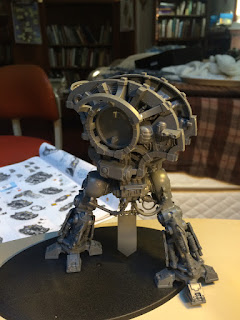 
I worked on customizing my drop pod, and added spikes and claws.  This was my first time trying to create spikes and making them consistent in size was a bit challenging.  As I continued I got better.  My suggestion is to use the first spike to trace out the others.  When I first started I used cardboard, but quickly realized that tracing plasticard resulted in more consistent sizes.  Even so, I still had to do a bit of trimming after the initial cut. 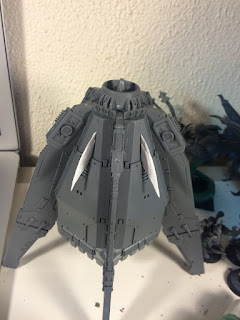 Some small spikes to get a feel for how it's done. 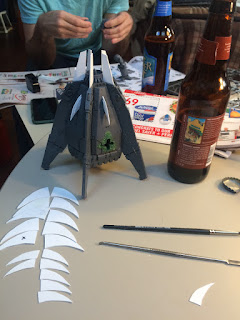 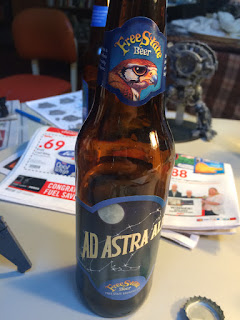 
Phil and I were drinking a mixed pack from one of the local breweries, Free State Brewing Company.  I have never had a bad beer from them, so check them out if you can.  Their oatmeal stout (shown in the first picture) is particularly amazing. 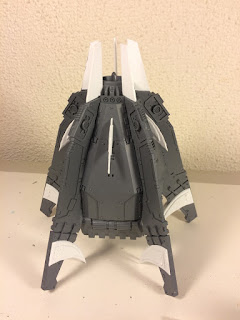 A shot of the final product. 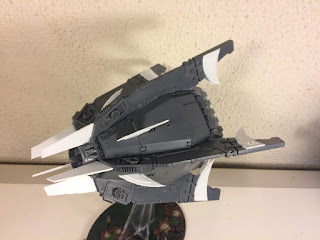 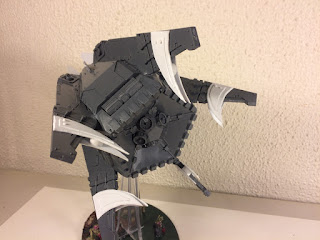 And from the back.

After Phil and I hung out I got some kickstart terrain from Impudent Mortal in the mail.  For a long time I have been hesitant to buy wooden terrain.  It always looks flimsy and cheap in pictures.  When I saw the kickstarter I had a dramatic change of heart because it was such a reasonable price. The package included four full sized building, 10 wall corners, and 10 wall segments. 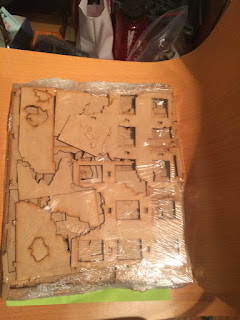 Some many building packed into such a small package.

Assembling the terrain I was pleased with the durability.  There were a few sections that needed to be popped out and none of the surrounding areas splintered or broke even when excessive force was applied.  Right now I have only assembled the major buildings (because wood glue is annoying at best), but I am going to finish up the other parts once I can get some hard-board for the bases. 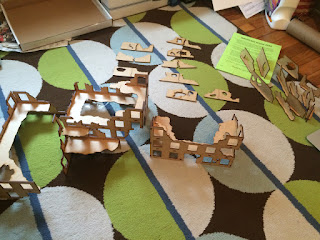 My only complaint is that the buildings have a ton of windows.  This does very little to block line of sight, and most of the time you can see all the way through a building.  I am planning on getting some thin strips of wood to barricade up a bunch of the windows.

Moving forward, I am simply waiting for some decent weather to prime the drop pod.  Once that get it primed I can go to town on getting it painted.  The terrain will need a bit more work.  As I have mentioned I need to make bases for all of the buildings, and I will need to spend some time making rubble and little doodads to make the terrain less generic.