Quantity vs Quality: A Mathematical Approach 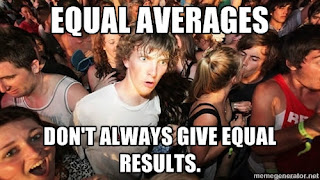 Over the past several articles I have been looking at when to give units toughness bonuses and when to buff units with psychic abilities.  These have been dancing around the edges of a much bigger question, "When it comes to units is quality better than quantity?"  I have been working on this problem directly, and I'm finally able to share these results.


When people compare two units they often look at each units chances to do damage or take damage.  These percents can be used to calculate an 'expected value' or an 'expected average', and this is what most people compare.  For instance, a space marine has a 4/9 chance of wounding a guardsman with shooting, so 10 space marines will cause on average 10*(4/9)=40/9=4.44 wounds.  This unit of space marines would be comparatively better than any unit that caused less than 4.44 wounds.  One of the problems of using this method is that it doesn't tell you a whole lot about when two units have the same expected value.


An example unit:
BS 4 units hit twice as often as BS2 units, so in theory having twice as many BS2 shots should 'even out' with a BS4 unit.  Here are the percents for one shot at BS4 vs two shots at BS2

The reason for this difference is that expected value is dealing with continuous probability, with an infinite number of dice being rolled; since we are playing in the actual world with a limited number of dice our results are going to be slightly different.

As the sizes of the two units increase our percents change.  For instance, if we have two models that are BS4 and four models that are BS2 then there is a 35.16% chance that the BS4 models will do better, a 32.92% chance that they will tie, and 31.92% that the BS2 models will do better.  We see that the percents for both sides wining increase and the chances of the two units getting the same number of hits decreases.  As the number of models in each unit approach infinity (and twice as infinitely many BS2 models) the chances of a tie will approach zero.  When this happens the chances of each side winning will approach 50%

Does this apply to more than just ballistic skill?
Yes.  This applies to all aspects of 40k, and dice games in general.  A chance that is a 'sure thing' is usually better (especially on a small scale) than multiple chances at a 'long shot' when all other things are equal.

What does this mean with regard to your army?
All things being equal a unit with lower stats is generally not going to perform as well as a unit with higher stats even if their expected averages are the same.  The perfect example is a squad of 10 Astra Militarum veterans compared to a squad of 20 Renegade guardsmen.  These two units cost the same points, and even though these two units will have the same expected average of hits from shooting the veterans are going to perform better more often than the renegades.  As these two squads get bigger they will become more or less even, but the renegades are always going to be catching up.  If you are comparing point values, a squad of veterans is (slightly) under costed compared to renegades and the renegades are (slightly) over costed compared to the veterans.

**Note: when I say slightly over/under costed I am talking in terms of fractions of points**

So all cheap units are trash even in large numbers?
No.  I could directly compare the veterans to the renegades because they have the same weapons and their ratio of ballistic skill matched the ratio of their costs.  Most units aren't going to match so perfectly, and slight differences in point values will make more of a difference than the percents shown here.  For instance renegades compared to veterans may be (slightly) over costed, but renegades compared marines are incredibly under costed.

Then why write the article?
As a whole we don't need to directly compare units to gauge quantity vs quality.  The previous examples help visualize the math.

How can my horde army remain effective?
Force Multipliers.  As I discussed recently units with worse stats are better targets for force multiplying buffs such as psychic powers or a character's special rules.  Let's use the comparison of 2 BS 2 models vs 1 BS 4 model.  If both units get twin linked for their weapons this dramatically changes the comparative performance of the two units.  The expected hits for the BS 4 unit increases to 8/9=0.8889 and the BS2 unit increases to 10/9 or 1.1111.  Looking at the actual probabilities the BS4 unit will have a 17.56% chance of getting more hits, there is a 46.09% chance that the two units will get the same number of hits, and there is a 36.35% chance that the BS2 unit will get more hits.

Putting all of this together:
Small, elite armies are going to be slightly more effective in low point games.  As more and more models/units are added these differences between a horde unit and an elite unit are going to disappear.

Even in a large scale battle this principle is still important.  A small firefight can take place between two isolated units.  As both sides take casualties this principle is going to become more and more relevant.

Hopefully this article has been helpful, and you have a deeper understanding of probability.  This weekend I am going to try and finish up all of the conversions for my drop pod.  My friend Phil (who has been featured in several battle reports) just purchased a bunch of new models, so we are going to drink beer and put things together.

Email ThisBlogThis!Share to TwitterShare to FacebookShare to Pinterest
Labels: Math