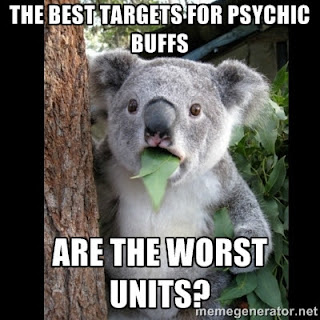 Conventional internet wisdom says that Divination is a gift from the emperor himself.  Let's look at some numbers and figure out when divination is going to be useful.  Not all units are created equal, so not everyone is going to get the same benefit.


The two powers I am concerned with in this problem are prescience and forewarning.  They offer the most stable versions of boosting damage and survivability.

I started by assuming that a player is using the optimized strategy for psychic powers detailed in a previous post.  A level 1 psyker will have a 1/6 chance to get forewarning and in doing so will split dice appropriately.  Level 2 psykers will have a 2/6 or 1/3 chance to get forewarning, and so on.  If the psyker doesn't get forewarning then they will throw all dice at prescience.  For this situation I am going to assume that there is only one psyker and that your opponent wont be able to deny.


The Biggest Assumption
All of the percents shown here are a single squad being compared with itself.  None of the percents here are intended to be compared with other squads.  A unit might have their damage increased by 50%, but if all they have are lasguns then how does this compare to a unit of bolters that increases their damage by 25%?  That is a topic for the future.


The Math Situation **Avoid if math scares you**
If a power increases durability by 30% and has a 50% to be cast then we multiply 0.3*0.5 and get an overall improvement of 0.15 or 15%.  Now let's say that because of our psychic powers we improve a squad's durability by 15% and damage output by 40% we would multiply 1.15*1.40=1.61  This means that if we increase a squads damage output by 40% and the durability by 15% then we have actually increased its overall performance by 61%.  The reason we multiply rather than add 0.15+0.40=0.55 is because if a squad is more durable then they are going to survive longer to shoot more.
The chance to cast powers is also dependent on the chances of getting forewarning.  For instance when I say that a level 1 psyker has a 66.19% chance to cast prescience and a 6.94% chance to cast forewarning this is averaging several things.  First off I am accounting for random amounts of warp charges, and I am averaging the chances for all of these charges.  Second off I am also accounting for when forewarning is successfully rolled as well as when it is not.  If we have forewarning, then the number of dice we use on prescience is going to be less than before.

Primaris Work:
A level 1 Primaris Psyker will have an overall chance to cast prescience of 66.19% and a 6.94% chance of getting forewarning, having enough warp charges, and successfully casting it.  When the primaris is upgraded to level 2 these chances are increased to 74.48% and 19.1% respectively.

To go from 'overall benefit' to 'minimum squad cost' I take the base cost of a psyker and divide by the overall benefit (written as a decimal).  For instance (Cost of a level one Primaris Psyker)/0.5312=94.12.  This means that a squad of guardsmen that costs more than 94 points is going to benefit from having a psyker.

If we look here at the numbers we see that the performance boost is pretty good for the low cost of the psyker.  This results in a low minimum squad cost, and most blob squads with more than 20 models and a couple of heavy weapons are going to benefit from having a psyker.

With marines' better ballistic skill, prescience is only going to increase their chance to hit by 33%.  Once again forewarning is going to provide 100% increased defense when our armor is ignored, but isn't going to provide any protection against normal damage.

Since marines already have a save and decent ballistic skill they aren't going to receive as much benefit as the guardsmen did, and as a whole sorcerers are not a good combination for marine equivalents.  Their cost is too great in comparison to the overall performance boost.  In general it seems that buying additional squads is going to give you better results.


Renegade Legions and Sorcerers
Renegade legions are an interesting situation because they have the option to improve both their ballistic skill and their armor save, so I will have one set of info for a unit with no upgrades and one with +1BS and a 6+ armor save.

Despite the increased cost of additional psychic levels the benefit is so significant that the total cost of the recommended squad goes down!

Remember, even though this situation appears to be very similar to that of the un-upgraded squad of renegades we can't effectively compare the two squads with the information here.

What we can say is that most of the time it isn't worth the points to buy a squad a renegades a sorcerer.  The minimum squad cost is significantly lower than what we saw with the marines, but renegades are so cheap that sorcerers are simply too expensive.

What we see here is that regardless of whether you have loyalist or traitor tanks; having a psyker dedicated to buffing your squad is a good idea.  These numbers were run based on trying to hit with a blast weapon.  Since scatter is random I can't say that that you are going to increase damage by x%, but I can say that you will increase your chance to hit by x%  Weapons that hit with BS will gain slightly less from prescience, but the defensive benefit will be the same.  Either way buffing your leman russ squads is beneficial.


Just like the previous situation we are looking at increased chance to hit for the 'offense' column.  Once again the benefits are significant enough where taking a dedicated psyker to buff an artillery battery is a good idea.  Obviously units such as wyverns that already have 'twin linked' aren't going to benefit from prescience.


Summary
In a practical list building standpoint you are going to be limited on both points and models, but here is how we can connect the abstract to something a bit more practical.

First off, when a psyker is worthwhile it is also generally worthwhile to max out their level.  Many squads had the minimum cost increase only by a slight amount, or in some cases it actually decreased.  In a world of min/maxing is is rare that the middle ground is the ideal choice.  When I see games and read peoples lists people's choices tend to move towards extremes.  On one side you have a single very powerful psyker and on the other you have multiple cheap psykers.  Both strategies have their merits, and depending on the situation one may be better than the other.  What I don't see regularly is 2-3 partially upgraded psykers, and the math seems to support this.

The second point is a bit more obvious.  Units that have low ballistic skill and low saves are going to benefit more than units with higher stats.  If you have two units with a lascannon you are going gain more benefit buffing the unit with lower ballistic skill.  The same idea follows with armor saves.  Units with worse armor saves have more to gain from forewarning than units with better armor saves.  This is all subject to change when you consider what units are going to be attacked.  If a unit of space marines is going to charge some terminators, then it is probably good to cast forewarning on them over a unit of renegades who aren't going to get attacked.  Also in an actual game you don't need to cast both powers on the same unit.  You can min/max whatever units need buffs at that particular moment.

*Edit: added paragraph about where 'minimum squad cost' comes from*
Posted by Andrew at 8:19 AM