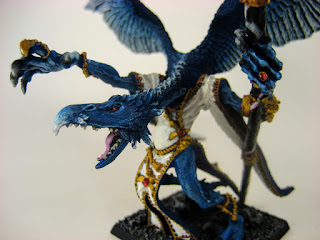 With the new chaos books arriving I have decided to start a Tzeentch army; because three chaos armies aren't enough.  Unfortunately, my first two games went terribly.  My first game, I didn't have any board control and got bottled into a corner.  The second game, I summoned as many squads of pink horrors as I could and had great board control.  Unfortunately this left me with almost no warp charges to cast witchfires and I only ended up killing one unit the whole game.

To try and strike a balance, I decided to try and optimize my warp charges.  I have discussed this topic previously, but this time things are less general and more specific to my army.

Question One:
How should warp charges be distributed for Flickering Fire of Tzeentch?  Should I invest in divination powers?  When should I upgrade to warp charge 2 vs warp charge 1.

Spread your warp charges as evenly as possible between all casters.  Don't worry about trying to cast prescience.  It costs more warp charges and limits your chances to cast flickering fire.

Question Two:
How many turns should I summon more horrors before focusing on using my warp charges for flickering fire?

Longer answer:
My setup here had a lot of assumptions that were specific to my particular army.  I assumed I had two unit that could summon and one unit of horrors to start.  I also assumed that summoning and flickering fire were the only two powers that I cared about.

With this in mind I ran two different scenarios:

Secondly, I assumed that each summoner would use 5 dice (ideal for warp charge 3 abilities), and the rest of the dice would be evenly distributed amongst anyone that could cast warpfire.  This different setup had a higher damage potential than the first, but resulted in the same answer to my original question.

With both of these setups (specific to my particular army), diminishing results kicked in after turn two.

Basically, if you summon squads on turn 3 or later they aren't going to have enough turns of shooting to make up for the loss of damage output that it cost to summon them.  However, this is all moot if you are summoning to do anything other than shoot.  Grabbing objectives or tying up units can't be factored into the calculations.


I still have a lot to learn about this army.  At this point I am 0 and 2 for my record, and I am not sure how much I need to change about my list.  More than that, I need to practice playing my psychic phase (something I haven't had to do extensively).
Posted by Andrew at 5:29 PM