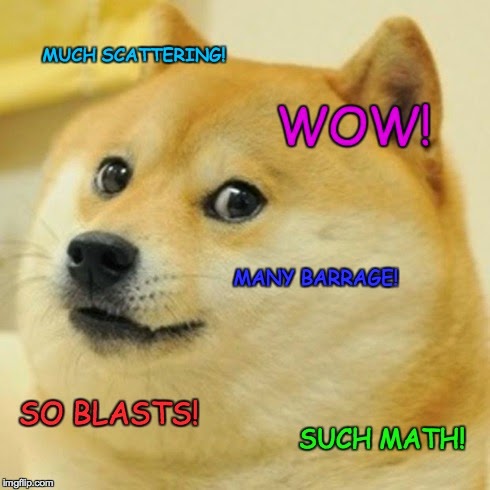 This is a post I wrote nearly a year ago for 40k Daemons.  The discussion on scattering and deep striking made me think I should revive this post.  Enjoy while I work on new calculations for deep striking.

One question that I have been pondering for ages has been, "How accurate are blast weapons?"  The scatter die has always been a wild card.  I finally decided to sit down, do a pile of trigonometry, and figure this out once and for all.  Let it be known; I do math so you don't have to.

**Warning: Explanation of math incoming!**
First off here is a basic overview of what I did.  I used the sizes found here for all of my calculations.  I also assumed that you would be placing the template directly in the center of the model.  Using the different blast sizes and scatter distances I determined when the blast would always, never, and sometimes (depending on the angle) hit the model.  Always and never were easy because they are dependent on how far it scatters rather than the angle.  For the 'sometimes' I used some trigonometry to determine what angles would be in or out.  From there I incorporated the chances of rolling a hit with everything else and got my results.
**This concludes the explanation of the math.**

Here is what I came up with.

Both of these tables assume you are placing the blast in the exact center of the model.  There were a few instances (such as the 25mm base) where I rounded something like 1.99 inches to 2 inches.  This is why the small base has the same chance to be hit as the other two.

Looking at the chances to hit with barrage weapons it immediately becomes apparent how important twin linking is for effective barrage sniping.

I also find it interesting that BS4 small blast vs a single non-vehicle model is the only chance that is less than the natural chance to hit.

Now you know, and knowing is half the battle.