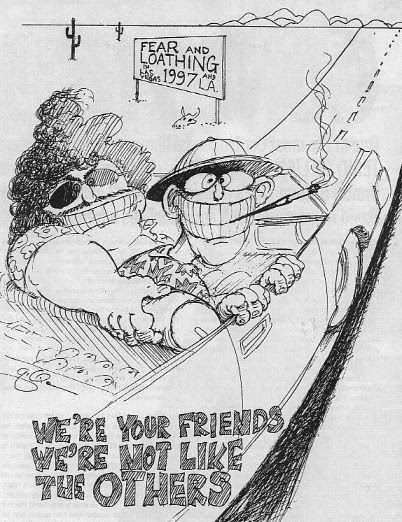 This weekend I got together with my regular gaming group, and any time this group gets together there is significant drinking.  This occasion was no exception.  So with my six pack of PBR tall boys I was set for the afternoon.


"I hate to advocate for drugs, alcohol, violence, or insanity to anyone, but they've always worked for me."
-Hunter S. Thompson


There were five of us so, two games were running simultaneously.  I brought Daemons and I played against Orks.  Here is my list:

We are playing tactical objectives and we roll mission 1, so we have 3 objectives each.  Our deployment is vanguard strike.

I deploy all of my fast things out front, with the two MC's hiding behind a large piece of terrain.  When I played Orks I regularly used a Shokk Attack Gun (SAG), and I don't want one of my MC's disappearing the first turn (if he steals the initiative).

He mostly just lines up across his deployment line.  The slugga boyz and burna boyz are on my left, and the storm boyz and tank bustas are on my left.  Most everything else is right in the center.

Most everything moves forward, but the horrors + Herald of Tzeentch stay put.

I cast forewarning on the seekers, and I manage to summon 10 bloodletters.

I run everything in the shooting phase, and my daemonettes manage to capture an objective on his side of the board. 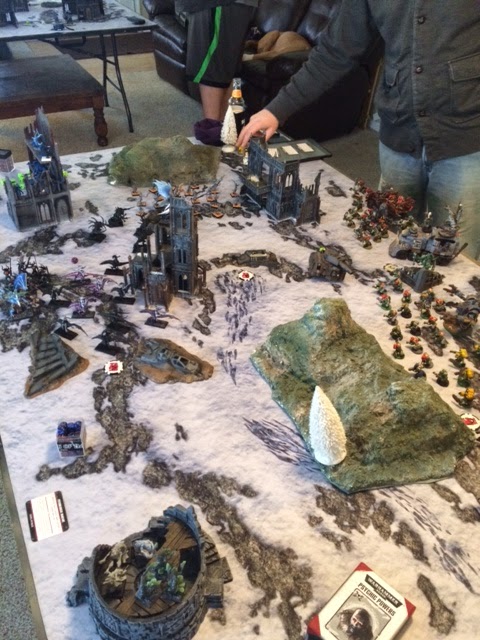 I realize that I forgot to roll on the warpstorm table.  We decide to go ahead and do that roll since it could hurt me.  I roll to blow up one of his psykers, and since he has none, nothing happens.

He moves his slugga boyz and burna boyz towards my dameonettes, his shoota boyz move up to get in range of the seekers, and his tankbustsas and stormboyz come around my flank towards the daemon prince.

His shoota boyz kill four of my seekers (since that was all that were in range), the shokk attack gun scatters wide and takes out 5 of my daemonettes (rather than the fiends), and the Deff Dread manages to wound a fiend, but doesn't get past the save.

The slugga boyz are 10 inches away from my Daemonettes, and they have to go through terrain to get there.  Since there isn't any chance of overwatch losses he decides to charge me and manages to make it into combat!  I kill his nob in a challenge and a whole pile of boyz, he kills a few of my daemonettes in return, but he loses combat.  Since I killed his nob his squad breaks, and I run them down. 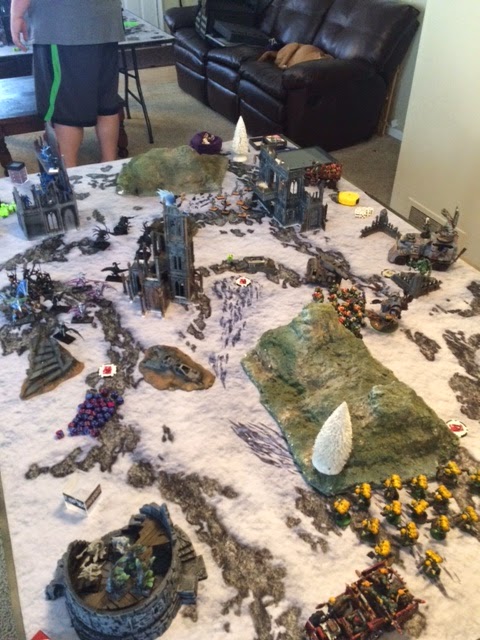 We get done with turn one and I write down a helpful reminder. 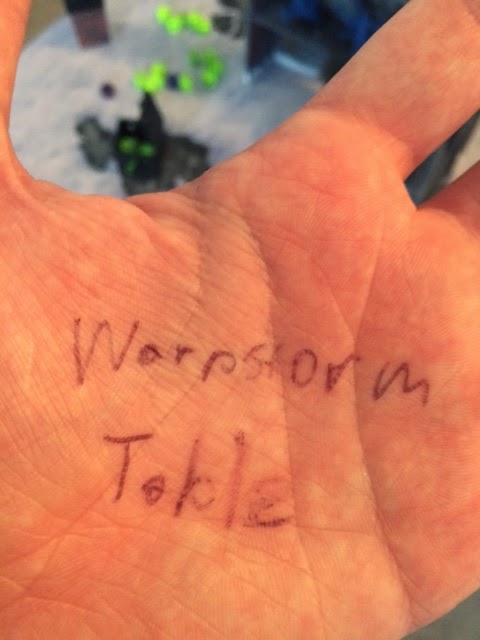 We have a special rule about Turn 2.  Everyone present must take a shot at the beginning of Turn 2.  it doesn't matter if you are playing this game, or a different game.  When Turn 2 happens everyone drinks.

Now you see why I wrote a reminder on my hand.

My two squads of flamers come in to play.  One lands by his trukk of burna boyz, and the other lands by the stormboyz.  The daemonettes and Lord of Change move towards his burna boyz because they need to die, my daemon prince moves to support the second squad of flamers, and the fiends + seekers work up the center to charge the shoota boyz.

I roll a one for warp charges, so I can't end up geting a power off.

The warpstorm table does a whole lot of nothing.  One squad of flamers takes out half of the storm boyz, and the other squad roasts all but one of the burna boys inside their transport.

I charge the Shoota boys with the fiends and the seekers and the burna boyz trukk is charged by the daemonettes.  The trukk gets exploded with the burna boy getting pinned, but surviving.  I kill enough of the shoota boyz to win combat, but we remain locked. 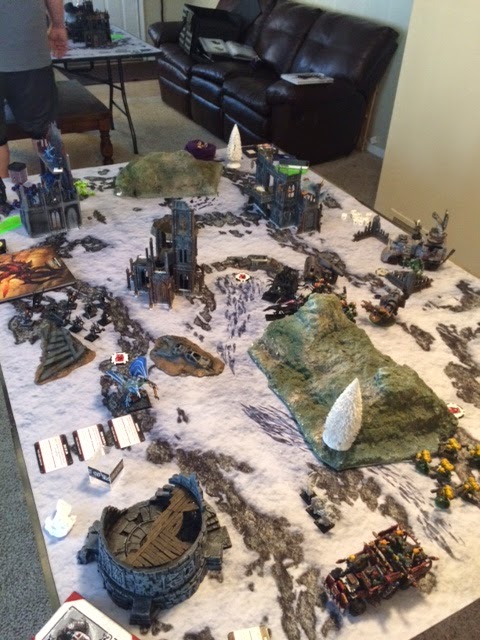 His Tankbusta trukk moves up to shoot at my swooping daemon prince, and the storm boyz follow behind getting ready to charge my flamers.  The battlewagon tries to go after my daemonettes, but instead gets immobilized on a very tiny ruin.  His Deff Dread is more or less stuck between terrain and a close combat he can't charge, so it just sits there.

His boyz inside the BW shoot at the remaining daemonettes and wipe a few more of the table.  The Tankbustas take a wound of my daemon prince, but I stay in flight mode.  A few of my horrors get taken out by the SAG.

In the shoota boy + fiend + seeker combat he kills the rest of my seekers, and I kill a bunch of his orks and we tie.

I didn't take a picture here.  Coincidentally this was also the point where everyone felt the turn two shots.

My daemon prince vector strikes his remaining trukk, but doesn't do anything, and my Lord of Change vector strikes a wound off of his Big Mek.  The daemonettes shuffle around, but most everything else is in combat.

The remaining squad of flamers goes over to try and roast the guys inside the battlewagon.  I might have killed one, but I forgot they have a painboy, and now they have 4+ feel no pain (oops).

His remaining burna boy is wiped out by the daemonettes in combat, and I kill a few more of the shoota boys. 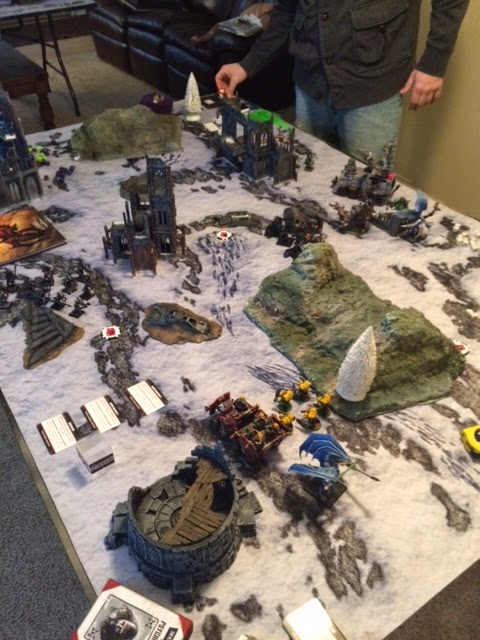 He moves his storm boys back to capture one of his objectives, and his unit in the BW jumps out to kill my daemonettes and go after another objective.

His tankbustas roll like monsters and take my daemon prince down to one wound, and knock me out of the sky in the process.  The SAG scatters wide and fails to hurt anything.

My fiends finish off his shoota boyz in combat, but he wipes out my daemonettes in return. 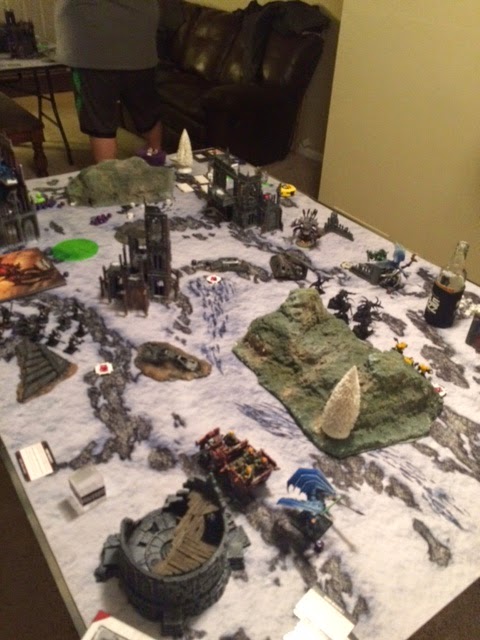 This is where things start getting fuzzy.

I move my daemon prince as far away from the tankbustas as possible.  My Lord of Change vector strikes his big mek, but does nothing.  The remaining fiends move over to capture an objective and possibly charge some stormboyz.

My warpfire forces enough casualties on the stormboyz to make them run.

The warpstorm table does nothing. 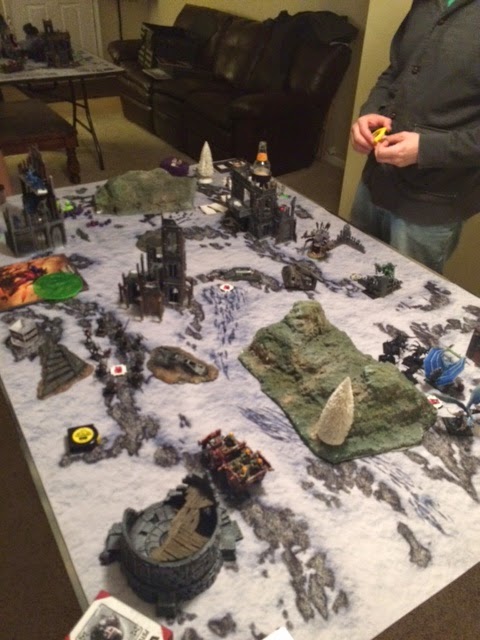 He consolidates most of his stuff into the corner where he is standing in the last photo, but the trukk of tankbustas go after my daemon prince.

The tankbustas manage to put the last wound on the daemon prince.

We decided to call it here.  I was up 9 to 4, and more importantly pizza had arrived.

Fiends never do as well as I hope.  They are really expensive for not much killing power and not much durability.  The only reason I keep running them is because I have the models and I need to fill points.

I was also fairly surprised that neither of the monstrous creatures did much.  They casted a couple of psychic powers each, but their vector strikes wiffed.