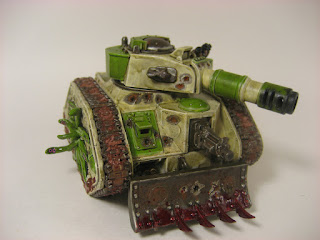 Hey!  I have some completed work!  Much of the past few weeks has been dedicated to me assembling models (not exciting) rather than actually painting them (much more exciting).  Finally I have some work worth showing off.

This tank was once a looted Ork Leman Russ, but now it has been repurposed for Nurgle.  Back in the day the tank was covered in spikes (literally nails), but as the nails fell off all I was left with was large chunks of glue.  At first I attempted to scrape the glue off, but I eventually gave up and decided to paint them as patches of rust. 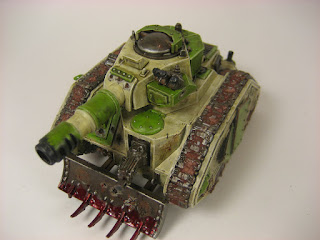 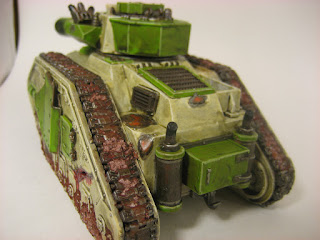 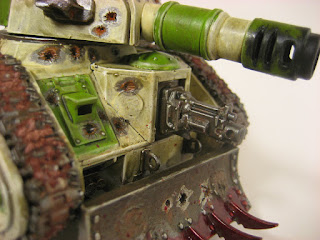 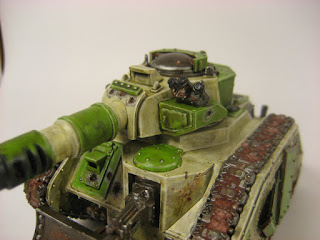 My 12 year old self decided to put sponson on the tank, but didn't bother making them the same weapon...  This time around I decided with the changes to ordinance (since 3rd edition) I would forgo the side sponsons.  Unlike the new Leman Russ models the old ones actually had gaping holes where the sponsons would have been; this mean that I had to find some way of covering them up with a conversion.  I covered one side with some spare armor plates and the other got blessings of tentacles. 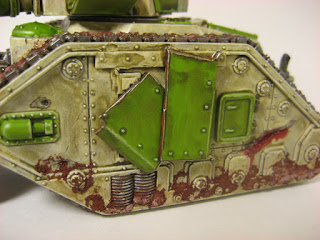 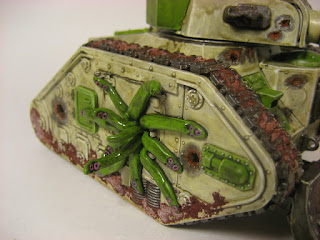 Upcoming:
Right now I have a giant pile of guardsmen that need paint, but the next thing on my list is Mortarion.  As a birthday present to myself I purchased the Mortarion model from Forgeworld, and I am planning on doing a massive post about everything that goes into painting that model.
Posted by Andrew at 8:00 AM