Meat for the Meat Grinder: A Khorne Daemonkin Battle Report 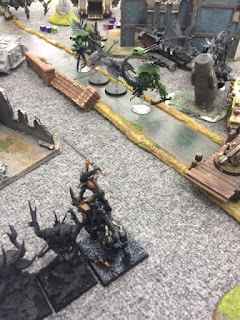 Yesterday I played a game against one of my good friends, Phil, who has recently gotten back into 40k.  He was trying out a Dark Eldar list and I decided to play around with Khorne Daemonkin.

We rolled Capture and Control for our mission with dawn of war deployment.  My warlord trait let any unit within 12" of my warlord re-roll failed charges.  Phil won the roll to deploy and go first.

We both deployed in a line with each of us deployed on the others flank.

There is an objective hiding behind that house. 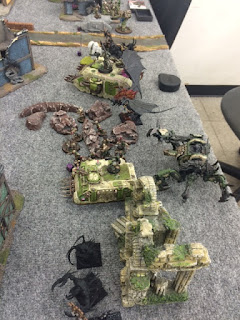 Little did I realize that the rhino/helbrute deployment was OP.

Phil moves his corpse thief right up the center and all his transports hide behind terrain or the talos.  He shoots dark lances at my landraider and only manages to take off a single hull point.  The haywire blasters score 4 glances on my helbrute and I manage to make 3 saves!

I know that turn 1 is going to be avoidance since I don't have any buffs from blood tithe points, so my bloodthirster, Marines, and one squad of bloodcrushers hide behind a building.   The spawn go hang out in some trees.

Nothing to see here.

I shoot at some raiders, force a couple of jinks, but I can only get one glance through his jink saves.

Phil moves two of his raiders towards my chaos spawn also capturing an objective in the process.

Up in my business, stealin' my objectives.

The corpse thief attempts to move up, but only moves 2" due to the, very, difficult terrain.  The talos make up for this by wrecking my landraider with their haywire blasters.  Four of the dark lances shoot at my helbrute, but since I roll my saves like a boss only a single glance gets through.

With three blood points I give myself feel no pain and rage/furious charge.  My bloodletters land on his back objective (the one hidden behind the house), because I figure most everything else is going to be tied up in combat.  The posessed decide to jump out of their transport because I expect that the spawn are going to need some help dealing with the hurt headed their direction.  With my bonuses I decide to try and eliminate the corpse thief early in the game, so the bloodthirster, bloodcrushers, and terminators line up to charge.  I did not realize that the models with fleshbane also caused instant death on 6's  Once again my shooting forces some jinks, but doesn't manage to blow up any of the raiders.  I manage to wreck one of the two raiders by my spawn and the grotesques pop out.  My terminators charge at the corpse thief soaking up the overwatch, but don't make it into combat.  The bloodthirster and bloodcrushers make the charge easily and since the bloodcrushers went in first the bloodthirster can only be hit by one model with fleshbane.

The screamers were one of many proxies used in this game.

Two of the talos attack my bloodthirster, one attack manages to wound, but it is instant death, and I fail my save.  Goodbye bloodthirster....  The bloodcrushers are clearly angry, they make all of their saves, and kill one of the talos in return.

All of the grotesques jump out of their transports.  Two squads hang out by my spawn, one eyes down the possessed, two more prepare to charge the terminators, and the last one moves in to support the talos.  Phil's shooting finally manages to kill my helbrute, and it explodes after absorbing an insane amount of shots.  The spawn get wiped down to one model, and the possessed are removed from the board.  Both squads do some damage in return, but not enough to claim victory.  Phil rolls terribly with his Talos and fails to cause any wounds to the Bloodcrushers.  The Chaos Lord and Terminators do much better though.  One of the grotesque squads fails its 4" charge through the river letting the terminators deal with one squad at a time.  The terminators kill one of the grotesques and I put a wound on the haemonculi; all while taking no wounds in return.

With four blood tithe points at my disposal I give everyone +1 attack and feel no pain.  Most everything is locked in combat, but the second squad of bloodcrushers goes after an objective and my soul grinder moves up to try and join the melee in the center of the board.

That is how we party!

Since the haemonculi and grotesques *coughscourgescough* failed their charge my soul grinder ends up with a hilarious shooting opportunity; I could insta-kill his warlord.  I shoot the flamer template, get one wound to the haemonculi, and eat up the special wargear with the wound.  The autocannon follows up and manages to finish the job, while the additional wounds from the two weapons manage to kill one of the grotesques!  In combat the spawn are finished off and my bloodcrushers drop down to a single model.  My chaos lord decides that he has had enough of this challenge and promptly removes the head of the haemonculi.

Phil moves his transports out of the center to try and block my bloodcrushers and marines from supporting the center, but he manages to wreck one of his own transports when he fails his dangerous terrain check.  One of the squads of Grotesques jumps back in a raider and flies over towards his back objective controlled by my bloodcrushers.  Shooting does nothing.  The remaining two grotesques in the river charge my terminators.  I manage to take out the two that had been in combat previously, but I lose two of my terminators in the process.  The talos also manage to finish off the last bloodcrusher.

With all the death and destruction I have ended up with 6 blood tithe points, so I summon another squad of bloodcrushers right next to the Talos and give everyone feel no pain.  My old bloodcrushers go after one of his transports as do my bloodletters, and the rhino full of marines goes to capture an objective.  Shooting kills a grotesque, but there isn't much left that can shoot.  In combat I kill one of his transports with my bloodcrushers, put a hull point on another with the bloodletters, and kill a few grotuesques with my terminators.

One of the grotesque squads moves towards my cultists, another jumps out of its transport to attack the bloodletters, and the corpse thief heads towards the soul grinder.  Shooting from the corpse thief takes the soul grinder down to a single wound, and it gets finished off in close combat.  The bloodletters get wiped out, but the cultists remain safe when the grotesques fail their charge.

I am running out of units, so I use my blood tithe points to summon more bloodletters; however, they scatter wide and mishap, destroying the entire unit.  Combat has me take out some grotesques, and lose the remaining terminators.

While there was a turn 6 we mostly just went after objectives.  I don't think there were any kills on either side. We roll and the game ends.

When we count up our tactical objectives we actually have the same amount (12 each); however each unit that was killed by the corpse thief awarded him an extra victory point, so victory for the Dark Eldar.

I knew that the bloodthirster was a risk, and I might have played it differently if I had known about the instant death, but I always knew that losing it was a possibility.  The corpse thief was a brutal formation, and I should have done a better job of trying to avoid it.

On the plus side I was completely blown away by the performance of my terminators.  I have never had terminators with feel no pain and they took a massive beating.  Most of the squad's killing power came from the chaos lord, but the other models did an amazing job of absorbing wounds.  I am definitely planning on running more terminators.

As with previous games I have managed to maintain feel no pain for every turn past turn 1.  This has been paramount to the survival of my units, and I don't think I would have been nearly as successful if I would have tried to save up for bigger rewards.