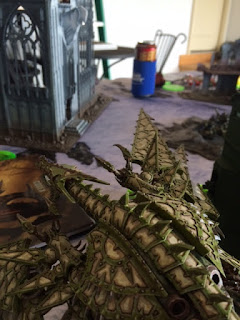 I played against my good friend Cameron this weekend.  He brought Blood Angels with allied Skitarii and I brought Crimson Slaughter with allied Daemons.  This time around I wanted to try something out of the ordinary, so I settled on a list that was pretty much just a horde or Nurgle.

Our mission was The Emperor's Will (everybody ties), and our deployment was  Hammer and Anvil.

This was my first time facing Skitarii, and I wasn't quite sure what to expect.  The Rangers were in the drop pod and the infiltrators deployed in some ruins just ahead of the tactical marines.

All of my stuff moves up.  I cast foreboding, but doubt that it will come in much use on turn one.  Most everything runs in the shooting phase except the bikes; which I (smartly) leave back.

His drop pod lands in my backfield by my marines.  The landraider moved up towards my bikes and the librarian and death company hop out.  His dread and razorback also decide to scoot back.  In the psychic phase I manage to deny his attempt at activating a force weapon.  The marine shooting kills two of my bikes and a handful of cultists, and the rangers kill all of the marines except for the sergeant.  His Death Company also manage to fail their 6" charge; leaving them out in the open.

We decide to pass on the turn two shots, but instead try a nice glass of... 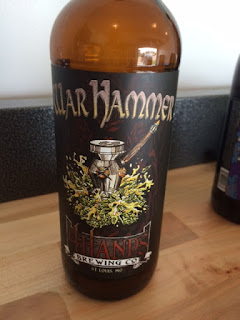 
My Heldrake and Terminators arrive.  The heldrake fails do do anything to the drop pod with the vector strike, and gets in position to burninate some marines.  My bikes and spawn team up to take on the death company, the cultists and librarian move towards the rangers, and the beasts of nurgle get ready to take on the infiltrators.  I cast prescience on my spawn this turn, but don't have enough charges for anything else.  My shooting kills some marines here and there, the cultists eat the overwatch so the marine sergeant makes it into combat, and I manage to take out his squad leader in a challenge.  Cameron's Death Company crumples under the combined force of chaos spawn and bikers.  The bike sergeant wins his challenge, and turns into a spawn.  Thanks chaos gods....  My beasts of Nurgle charge the infiltrators, kill one, and lose a couple of guys in return (ouch).

Cameron shuffles his units around, but nothing goes anywhere significant.  Shooting kills one of my terminators, the lone spawn, and the remainder of the bikes.  The infiltrators manage to wipe out my beasts in close combat to end the turn.

My herald and plaguebearers come in and land by the terminators.  The spawn get ready to charge some marines, my heldrake moves over to flame the infiltrators, and my culitists get ready to charge the rangers.  My terminators and nurglings hop on his back objective; stealing it from the whirlwind.  In the psychic phase I manage to summon a second squad of plaguebearers. 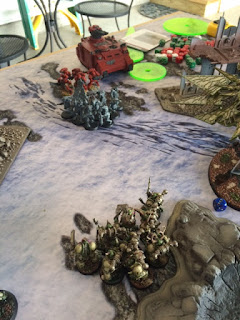 All of a sudden there are a lot more daemons.

The heldrake wipes out all three infiltrators with its shooting, and we are ready for assaults.  I take out some marines with my spawn, and a few rangers with the massive combat. 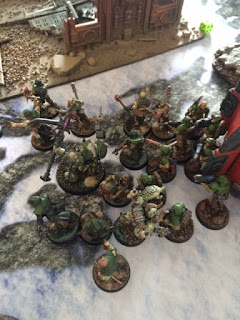 Things are starting to look a bit grim(dark) for Cameron, but he knows that I don't have anything that can hurt his landraider (technically the plaguebearers can, but they won't catch the tank).  He decides to move the landraider on to my objective.  Shooting kills another terminator and a few plaguebearers.  The massive combat sees a few more rangers and cultists bite the dust.

The heldrake flies off the board, and everything else scoots towards an enemy unit.  In the psychic phase I cast cursed earth, and prescience.  I don't have anything to shoot with, so we start combat.  One squad of plaguebearers takes down his five marines, and I polish off his rangers.

He shoots a few more of my models, but his lascannons aren't effective against my swarms of infantry.

We decide to call the game here.

I didn't expect hordes of infantry to be effective, but things worked out pretty well.  If his rangers had killed all of my marines and avoided being in combat things might have turned out differently.

In the psychic phase I followed my recently outlined strategy for optimizing the psychic phase.  There were a few times that I would have liked certain powers to succeed, but I got at least one power off every turn (even though I forgot about re-rolling with my sorcerer), and I didn't perils at all.

No one informed me that Skitarii Infiltrators were part of the Wu Tang Clan.  Seriously, they ain't nothin' to f*** with.  Two combats wiped out all of my beasts of Nurgle.  They have all kinds of de-buff shenanigans in close combat, and two wounds apiece.  The bale flamer melted all of them instantly, but if I had know their strength they would have been my heldrake's first target.