Painting In The Heat 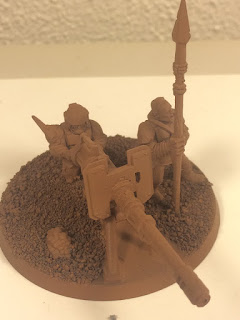 One of the worst things about summer is that spray painting models is more or less off limits.  Anything above 80 degrees (26 for people with a decent system of measurements) results in models with a sandpaper texture.  As of today I have a tip for helping alleviate this problem.


The owner of my local gaming shop was talking to me about this problem and he had an interesting suggestion.  "Set your models and spray paint outside for about 20 minutes to let them come up to temperature with the surrounding air."  He went on to say that the problem of priming in the heat is twofold: When your bring cold models outside small (minuscule) amounts of condensation can form on the model which can cause the paint to clump, and aerosols are naturally colder, so they are even more prone to immediately condensing.

I was unsure of the actual science behind his reasoning, but the logic seemed sounds, so I decided to experiment this afternoon.  When I sprayed today it was 91 degrees (33 C) with 61% humidity.  Not the hottest day of the summer, but still under an "Excessive Heat Warning" and far outside the normal spray range.

I started with a couple of pieces of scrap plastic.  The first one I sprayed immediately and let dry.  The result was the sandy texture that many of us have come to loathe.  No surprises, but I wanted a control group.

The second piece of plastic was left outside with the spray primer for about 20-30 minutes while the first piece dried.  Once the first piece dried I primed the second.  The result was more or less exactly what I wanted.  There was no sandy texture and the paint was evenly coated.  Success!

Now that I had some confidence from my test I wanted to try it out on a model.  A heavy weapon team seemed like a good candidate.  After waiting 20 minutes I ended up doing two coats on the model with dry time in between.

The result was less clear cut.  There were a couple a couple of patches of sandy texture, but the texture had less grit than normal.  Despite a couple of bad patches the majority of the model was smooth.

Letting your models and spray paint reach the temperature of the surrounding air can help alleviate a lot, but not all, of the issues with spraying models in the heat.

This doesn't mean that you can spray your models in any conditions, but this technique does appear to raise the threshold for acceptable spraying conditions.  I would strongly advise painting a test area to check the conditions before painting any models.


If any readers have tried this technique before, or try it as a result of this article, let me know your experiences.
Posted by Andrew at 10:00 AM