An Adventure in Forge World: Customer Service and Assembly 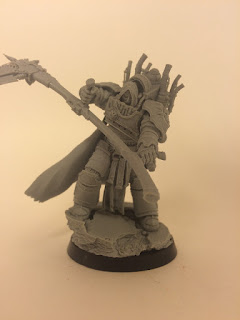 Recently I made my first forge world order.  I had been wanting to make one for years, and nearly pulled the trigger several times.  Real life issues have always prevented me from following through with an order.  Until now!  This series of articles is going to catalog all my experiences working with a Forge World product for the first time.

Pre-Assembly:
First off I was surprised at how quickly my order arrived in just about a week, which was much faster than I had expected.  The package contained a nice looking box with my model as well as a note to the seriousness of this venture. 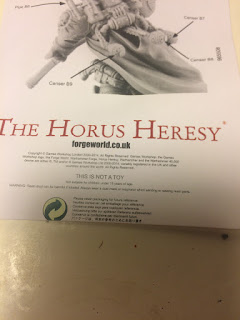 DO NOT HAVE FUN WITH THIS PRODUCT!

I had read from several sources that you should alway wash Forge World products with soap to help remove the mold release agent, and as I inspected my model I noticed that there were several areas that were shiner than others. 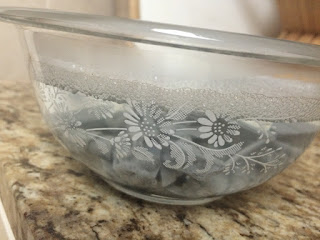 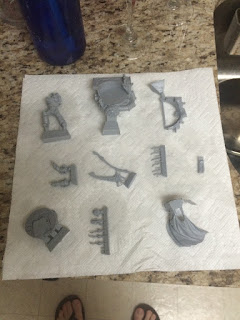 All of the parts after their bath fully in tact.

As the parts dried I noticed that the lower half of the legs were still very shiny and smooth.  I was skeptical, so I cut the flashing off from the legs and gave it some spray paint to see how things would stick.  The flashing had the same shiny finish, so I figured the two would probably hold paint in a similar fashion.  The resulting paint flaked off almost immediately as it dried....

I started doing more internet research and tried soaking the legs for longer periods of time in pure dish detergent and even simple green (which I normally use to strip paint from older models), but nothing seemed to work.  At this point I emailed Forge World about my issue and asked if they knew of anything that could be done.  I started working on the plague tank and set Mortarion aside.

The next day one of my friends sent me some info talking about spraying Forge World models with a dull-coat finish.  This is the same dull-coat that I normally use on my models, so I figured it was worth a try. Once again I tried it out on the piece of flashing first.  One coat of dull-coat followed by one coat of primer.  It seemed to do the trick; the paint didn't flake off.  I coated the body, but then received an email from Forge World saying that they would send me a replacement part.

I receive the replacement part and I am immediately glad that I waited, because I notice that this casting is clearly of higher quality.  There were a few parts on the original body where I wondered, "Is that a miscast or just Nurgle?"  Now I was certain of the miscasts on the original body.  It also made me wonder if the made to order parts go through more quality control than the ones that stock the shelves.

Assembly:
Cleaning the flashing off wasn't a big deal.  There was clearly more of it than most products I have worked with, but removing it was easy.  My normal glue* seemed to work well.  It bonded quickly and I didn't need to use to much to keep things in place.  The structure of the model was better than I expected.  When I looked at all of the pipes and censers I fully expected to be pinning tiny pieces in infuriating ways.  As I assembled the model I realized that all of the smallest pieces touch another part of the model in at least two places.  Right now I am feeling confident in the structural integrity of my model, but only time will tell.

I did finish painting the scenic base while I was waiting for replacement parts to arrive.  Once I realized that normal base isn't supposed to be completely flush with the scenic base all of the pieces fit nicely together.  If you are assembling this model and the base doesn't seem to fit together try moving the regular base up a bit and it should slide right into the scenic base. 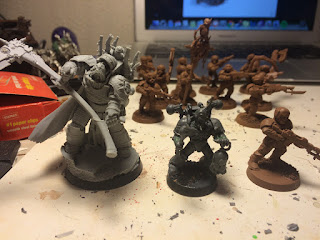 Here he is compared to a marine and guardsmen.

Right now he is shown with his scythe, but I didn't glue it in place.  I wanted to paint the two parts separately allowing more access to the details on his chest.

I also still have the first body!  This will be a good experiment to see if using dull coat BEFORE priming makes paint stick better.  I won't give it the full treatment, but I will at least give it at least three layers of paint.

Stick around to see how this model turns out!