An Initial Game of Age of Sigmar 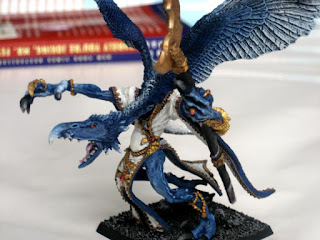 I played my first game of Age of Sigmar.  When the rules were release I poured over them as well as the war-scrolls, but I wanted to reserve any real judgement until I played a game.  Upon an initial assessment, this game is fun.


If you haven't looked at the rules they are free and can be found here.

I played in a 2v2 with three other people who I had never met.  There were 100 wounds per side, and everyone just brought what was fun.  There were monsters, war machines, large blocks of cheap infantry, and everything else in-between.  All of us were looking up rules throughout the game, but we were all still learning.  I think that once people know all of their rules the game is going to move very quickly.

One thing that adds an interesting layer of depth is the nuances of wound removal.  The defending player choses which models to remove rather than removing them from the front or the back.  This means that you can make charge distances more difficult when out of combat, or in combat you can potentially force your opponent out of combat.  There were a couple of situations where a large group of skaven were in combat against multiple units of Stormcast Eternals.  The first unit of Stormcast would hit and the skaven player would remove the models closest to the second group of Stormcast.  This meant that the second Stormcast ended up outside of 3" and were unable to attack.  The Skaven player still got to attack the first unit, but now the fight was a bit more evenly matched.

Another interesting aspect is the order of combat.  One person picks a unit and attack then the opponent picks a unit (not necessarily one involved with the first unit) and attacks.  This goes back and forth until all units have attacked.  What this means is you want to attack with a unit that is at full strength.  There were many times that one of us would say, "Well that unit has already been hit, so I'm going to save attacking with them for last."  If you know you can wipe out a unit, or your unit is going to be wiped out, then you can prioritize your combat to do the most damage and/or prevent the most casualties.

I am holding judgement on randomized turn order.  Melee heavy armies don't seem to care too much because most units don't gain any benefit when they charge.  On the other hand shooting and magic heavy army gain quite a bit when they have two turns in a row.  Whole units could be removed, or multiple units could be summoned.  Either way, I need to try out more games before I get a good feel of the magnitude of difference it can make.

Our actual game went back and forth.  After Skaven got two turns in a row (with tons of shooting) we were at a serious advantage.  There were several units of Stormcast that were simply wiped out before they could get into combat.  Things turned around a couple of turns later and eventually all of the forces of chaos were wiped off the table.

The best part about all of this is after the game was over we all spent about 15-20 minutes sitting around talking about, "How did you feel about the game?  Were things fair?  Did the armies feel balanced?"  In all of my years of wargaming I have never had an experience like this.  Even though no one knew each other we all wanted to make sure that everyone had fun playing.

In it's current form this isn't going to be a tournament game, and it doesn't need to be.  Lots of people have fun playing games for the sake of playing games.  Not every game needs to structured for a tournament.  Old fantasy players might have a few more gripes about the changes, but the sky is not falling.  Age of Sigmar is a fun game.
Posted by Andrew at 10:00 AM