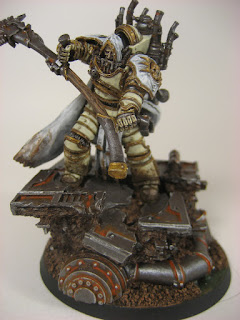 After a month of solid work dedicated to painting Mortarion he is finally finished.  I can say without a doubt that every ounce of my skills went into this model.  This was also an incredibly fun model to paint.  It was a great break from churning out squads of guardsmen and tanks.  Most of the time I am concerned about pushing models out in a relatively quick manner because guardsmen are expendable, but it was very refreshing being able to take all of the time I needed in order to make this model look perfect. 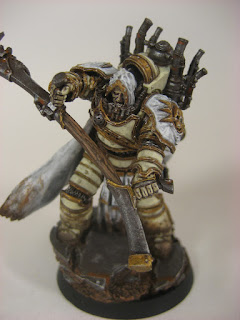 How I Paint:
When I paint, I don't complete one area at a time; I keep all areas at relatively the same level of detail.  I will complete all of the initial layers at the same time and then all of the washes at the same time etc.  This reduces the danger of painting outside of the lines when it really counts.  On the initial layers there are always a few places that are messier than I would like, but once the wash goes down I am working with smaller brushers and being much more meticulous. 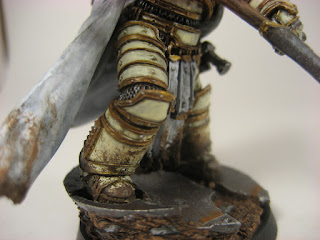 After the brown primer I painted one layer of off-white (Pale Sand: Vallejo) over all of the main armor areas.  I then washed everything with a dark green wash (Athonian Camoshade: GW).  After the wash I did a second layer of the same off-white, but I did not paint any of the recesses.  Finally I used a brown wash (Agrax Earthshade: GW) only in the deep recesses.  This model actually had deeper than normal recesses which made the effect of this last step even more pronounced. 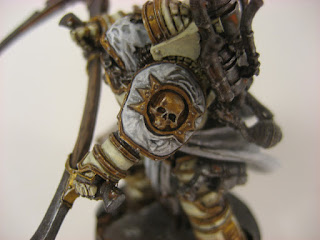 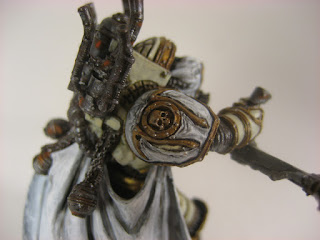 Gold:
The first color down was a lighter brown; then I went straight for the gold (zing!).  I am still using a pot of gold (paint) from 2nd edition (Burnished Gold: GW), so if you know of a good quality gold color let me know in the comments.  After a layer of gold I did an incredibly faint highlight of mithril silver on most of the edges.  I didn't highlight all of the edges because this represents where the gold has worn off, and it likely wouldn't wear off consistently in all places.  Finally I washed all of the gold areas with a brown wash (Agrax Earthshade: GW).  I didn't want the gold to be incredibly shiny, so the wash was done last.  If you want a shinier gold then wash with brown after the first layer of gold, build up a second layer of gold, and end with the silver highlights. 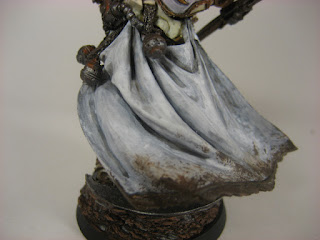 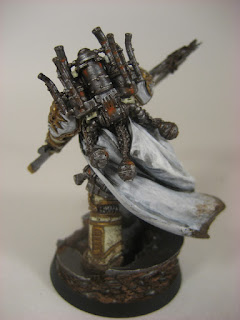 White Cloth:
This is something that people seem to have trouble with, but just requires patience.  I started with a layer of light gray followed by a layer of white.  After the first layer of white (White: Vallejo) I washed everything with a black wash (Null Oil).  Finally I built up four or five layers of very thinned out white.  Each layer covered less and less area on the cloth. 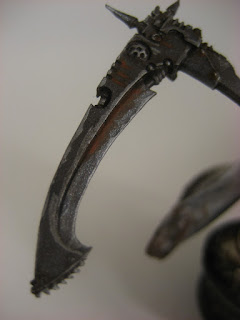 Rusted Metal:
I started with a layer of dark brown (Marron Chocolate: Vallejo) followed by a layer of darker silver (Metallic Gunmetal Gray: Folk Art).  Next I washed all of the metal with a brown wash (Agrax Earthshade: GW) and after it dried I used the same silver as before to build up the main areas while avoiding the recesses. Using a 4:1 mix of orange (Lava Orange: Reaper) and dark brown (Marron Chocolate: Vallejo) I started creating the patches of rust.  For this model I was a bit more purposeful where I put the rust and only painted areas where you might actually see rust.  I followed up with several layers of orange that was a bit more watered down than normal. 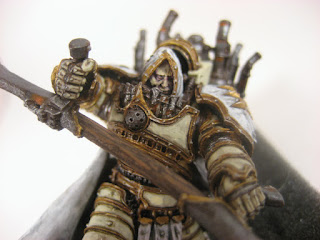 Skin:
I had written a guide for how I paint skill for another blog, but I no longer have access to that guide.  Alas.  I start by painting on a layer of light brown (Sable Brown: Americana) followed by a layer of my main skin color (Fair Skin: Reaper).  The radical part about how I paint skin is that I use a purple wash (Druchii Violet: GW) after the initial color.  After the wash I will layer 4-5 coats of thinned out flesh color (Fair Skin: Reaper); the goal is to have the smallest hint of purple show through.  I highlighted the edges with a lighter skin tone (Fair Highlights: Reaper), and this would be where I end non-Nurgle skin.  Since this is Mortarion I mixed (Waywatcher Green: GW) and (Lahmian Medium: GW) in a 1:1 ratio and painted a thin layer over all of the skin.  This gave it a green tint without making it look like ectoplasm.

This was an incredibly fun model to paint.  I wish I had the time to paint every model to this level of detail.  Up next I am finishing up a squad of guardsmen and a wyvern (since it is now cool enough to spray on a consistent basis) and then I am back to more guardsmen.