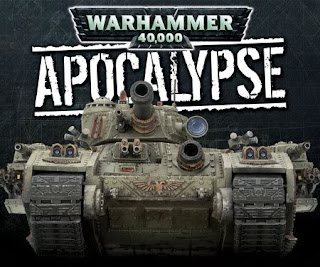 Apocalypse is a form of 40k that draws quite a few strong opinions.  Some people love it because it lets them bring their toys that don't normally see much game time, but others hate it because it doesn't let normal units do much before getting blasted off the table.  I have never played an apocalypse game, but now my friends have begun organizing to have one in October.


As we were gaming this weekend we started to plan for our massive battle.  Our main restriction is all models must be painted with a minimum of three colors.  We want this battle to look good.

We were all given a homework assignment to figure out what we had painted and how many points that covers.  Here is what I have:


Daemons: 1535 before upgrades not shown on the model (there will be at least 500 pts of upgrades on the greater daemons)

Renegades: 925 without upgrades.  There are so many options for these guys that this will increase dramatically.

35 Guardsmen: 3 grenade launchers, 2 autocannons, 2 flamers, 3 officers, 1 icon, 2 vox casters
10 Veterans
Helhound
Chimera
2 Leman Russes
2 Wyverns
Valkyrie
(I have a 20 man block of guardsmen and 20 zombies that should be able to get three colors by our game)