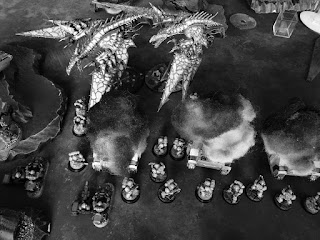 Last weekend we had our Apocalypse game and it was a giant pile of fun.

We used some slightly modified rules and they went as follows:

Everyone showed up around 9:00 to start setup and enjoy some bourbon with their coffee.  We did a pincer attack setup on a 6'x12' board.  Chaos deployed in the center and the forces of order deployed on either end. 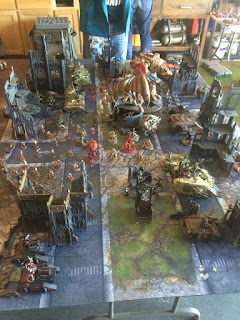 I am still astounded at the sheer volume of stuff we put on the board. 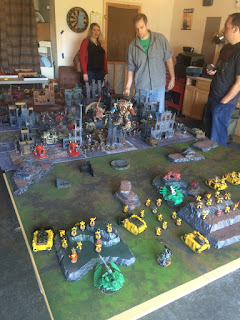 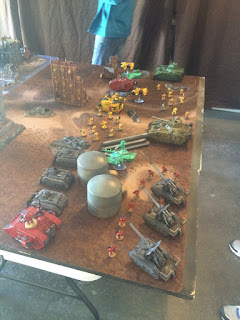 There is some serious firepower coming from this side of the board.

As Drew and Cameron began deployment, Harry and I began rolling for our daemonic gifts and powers.

Chaos needed two of these boards to keep track of everything.

As far as super-heavies go, Chaos had Scabeiathrax, An'ggrath, and the warhound titan. Order had two baneblades and a shadow-sword.

The more significant units for the forces of chaos were our deepstriking daemons (of which there were many), our crazy number of psykers (which let us dominate the psychic phase), and the large number of monstrous/gargantuan creatures.

The forces of order were no slouches either.  Their more important units were the three superheavy vehicles and the many deep striking units. 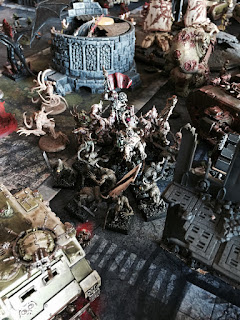 Epedimus did a great job at buffing the other Nurgle daemons in the center.

With our psychic domination we were able to effectively maintain invisibility on various key models.  Most of the time this was the titan, but there were a couple of turns were it was cast on one of the gargantuan creatures.

The heldrakes caused some serious pain for any exposed marines. 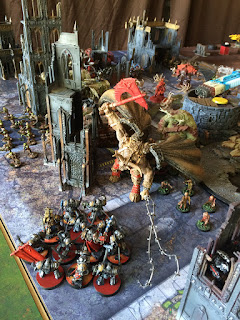 Draigo and Paladins stare down An'ggrath

There were tons of deep striking units on turn one.  Both sides brought plenty of disruption units.  As a result no one moved too much the first turn.

Lysander and 10 thunderhammer terminators managed to land right in the center of the Chaos force; however, since they were unable to spread out they became a prime target for my two wyverns.  The terminators ended up taking enough wounds to wipe everyone but Lysander who was eventually felled by the Bloodthirster of Insensate Rage. 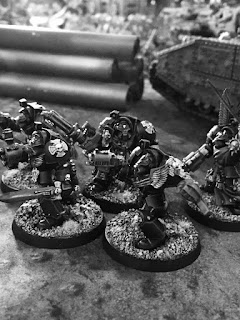 Backfield disruption played a significant roll in this game. 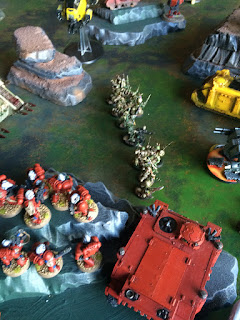 Some sternguard get ready to take out a squad of possessed.

If you haven't ever played a game this big it can be a bit exhausting.  Our hour timer meant we were rushed.  We forgot to make key charges.  Both sides made plenty of mistakes in their rush. 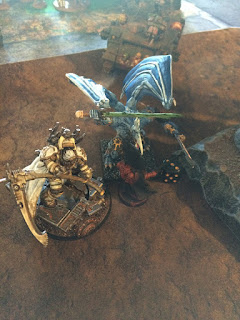 A couple of daemon princes take down a space marine captain.
Not pictured, the landraider and five terminators he started with. 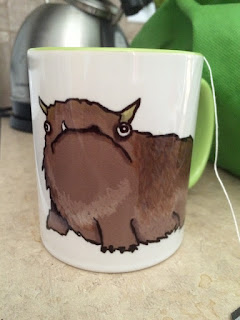 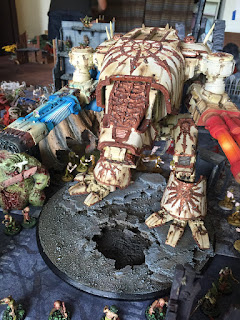 The titan was definitely the centerpiece of the battle.

Despite all of the big guys, the battle was relatively balanced.  Chaos didn't make a big victory push until the last turn.

Chaos managed to score 16 points on our last turn.

We all had a ton of fun playing this game and we are hoping to do a game this size about every six months.  This gives everyone enough time to paint up a few more units or a new superheavy.  I know that Cameron is going to begin working on his superheavy soon, so it should be available for the next game.  We also had a couple of guys who were unable to attend due to their schedules, so hopefully they can join in on the fun the next time around.