Toughness Bonuses: When to take or Pass 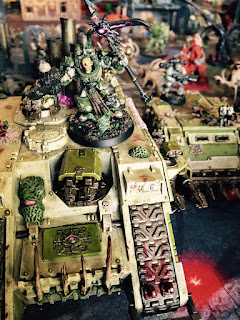 One of my favorite things about playing Chaos Marines is their customizable options.  When working with marines and cultists Chaos has the option to buy an additional toughness with a mark of Nurgle.  The difficult part is determining when this is a good idea vs when should you add more models.  I am here with math to help you all figure things out.


I am going to focus exclusively on squads of models rather than special characters because you can't add additional characters in most cases.

Adding additional models does also increase the damage output for a unit, but that is a conversation for another time

Toughness 3: Cultists
Mark of Nurgle add a staggering 50% to the cost of each individual model, so in order for the upgrade to be worth the cost we need it to make our model at least 50% more durable.


So the only times where mark of Nurgle is worth the cost is when the attacks are strength 2 or 3.  Since most people aren't worried about these attacks it is almost always better to buy additional cultists rather than using the mark of Nurgle.


This is more or less the same chart as was used for the cultists, but all of the strength values have increased by one.

I know some readers are thinking, "My terminators only get shot by plasma guns, how does this information help me?"  I will talk about shooting from mixed weapons in the next section.

Once again we have the same chart as before, but since the starting toughness is higher the strength values have increased as well.


A mark of Nurgle for chaos spawn only increase their cost by 20%, so it is effective against anything but strength 8 and above.

Bikes pay 30% of their original cost for a mark of Nurgle.  This immediately means that it isn't as effective as adding additional bodies when the strength is 7 or above.

Most of the time a unit gets shot it will have multiple types of incoming fire.  This could be from special weapons in a squad or it could be because they are taking fired from more than one squad.

Lets say I have a squad of terminators that I know is going to get shot up by marines with plasma guns.  A mark of nurgle will increase survivability from the bolters, but won't help with the plasma.  Here is how this gets calculated:

So there is an overall damage reduction of 40%.  So it is still more efficient to purchase a mark of Nurgle before adding additional terminators.

In future articles I want to look at defense vs offense of adding bodies and marks of Nurgle to get a better overall perspective.

**Updated with the numbers for Raptors**
Posted by Andrew at 9:23 AM