This weekend I got together with my friend to play some games and establish the rules for our ongoing league.

Our local gaming store recently moved, and they had to delay the semi-annual league, so we decided to start our own.  Here is what we came up with:

An initial season, where everyone plays everyone else, will determine an initial 'Champion'.  Once a challenger is chosen the challenger cannot change his list until he loses.  The champion can be challenged at any time by any of the other player, but the challenger has to provide beer.  This is is to prevent repeated challenges.

We all threw in some money for a champion's cup as a traveling trophy.  SKULLS FOR THE SKULL THRONE!!!

All models with at least three colors for paint have preferred enemy against models that have fewer than three colors of paint.

After deciding on the rules, we played a few games.  I played Harry, and Drew played Phil.


We played capture and control with hammer and anvil deployment.

Here are the highlights:

Turn 1:
I had the initiative stolen, and he moved everything up.  His drop pod scattered back 9" and his guys decided to stay inside.

My drop pod manages to land behind one of his maulerfiends on his back objective, and I hop out to take shots at its rear armor, but I just knock off a single hull point.  In the psychic phase, my sorcerer gets a perils of the warp but turns himself into a killing machine.  I managed to knock off two hull points and immobilize the drop pod, so now they would have at least one turn of being out in the open.  His rhino containing the plague marines with the lord gets blown up in the assault phase.

We each scored two objectives, but I managed to get first blood.

Turn 2:
Rather than doing shots on turn two, which is our usual tradition, Cameron broke out some really nice flavored whiskey.  I am normally against my whiskey being flavored with anything other than whiskey, but this was good. 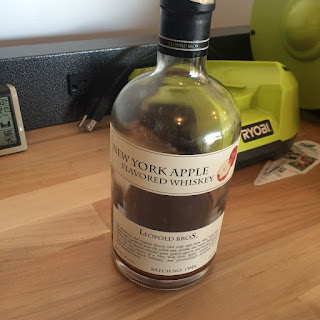 Tasty and packs a punch.


Harry's spawn charge into one of my blob squads, and since he charged through cover I went first.  I manage to kill one from overwatch, kill another one with my sorcerer (he still has fleshbane), and a third with the guardsmen.  With his remaining three he manages to do zero wounds.  This whole squad deserves a promotion!  His Khorne lord moves up with the berzerkers and manage to hug some cover.  The plasma plague marines move to engage my marines on his back objective, but fail their charge.  His maulerfiend charges the same marines, but is taken down with a pile of krak grenades.  The second maulerfiend charges my spawn and kills two.  Lastly the Nurgle lord and plague marines charge my bikes, and we slowly eat each other. 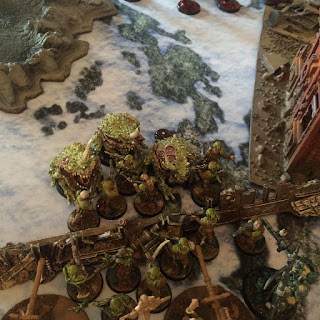 Nurgle loves us more than you!

Given an opportunity to escape, my marines hop back in their drop pod and fly away.  I move some units around to get into a better firing position.  I manage to take out 5 of the berzerkers and a few plague marines with shooting.  In combat, the remaining maulerfiend chews through my last spawn, and the plague marines + bikes continue to go nowhere slowly. 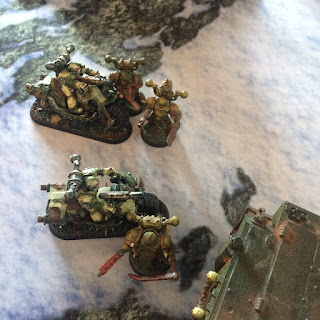 Harry got crappy cards, so he only scored one objective, but thanks to a d3 roll I managed to score 3 points.

The Khorne lord moves up, prepares to make a 2" charge through cover, and fails....  The remaining Berzerkers split off to go claim an objective.  Harry's maulerfiend chases down my command squad, kills two, and fails to wipe them. 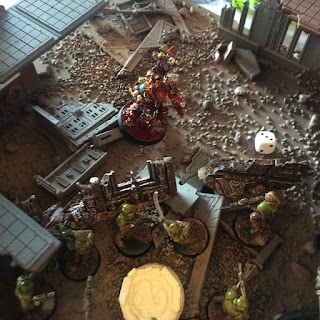 The Khorne lord was so angry.

I shuffle around to capture a few more objectives and get better firing position.  All three rapiers take aim at the Khorne lord, and vaporize him.  My dreadclaw flies towards his havocs, but the marines stay inside.  Other shooting knocks the berzerkers down to a single man, and the backfield plaguemarines down to three.  In combat my command squad loses, and runs but isn't caught, and doesn't make it off the board.  The zombies manage to join in the ongoing bike + plague marine combat.

At this point Harry has his Nurgle lord , a squad of havocs, a single berzerker, and a maulerfiend.  Pushing to the end of the game:  The maulerfiend kills my command squad, but is taken out by the rapiers before it can kill anything else.  His Nurgle lord is eventually brought down by the weight of so many zombies.  The havocs are taken out by my marines in the dreadclaw.

Conclusion:
VICTORY!  I didn't completely table Harry, but things were close.  There were a few bits of luck that helped.  Harry had a bad draw of cards on turn two, and the failed 2" charge was key.  Even still I feel like my list is fairly solid.  The rapier laser destroyers are quickly becoming my new favorite unit.  They just melt vehicles.  My wyverns, on the other hand, have had a rough couple of games.  I have just had bad luck trying to roll hits.  I probably won't get any games in next weekend, but we are planning another get together in a couple of weeks.
Posted by Andrew at 9:30 AM