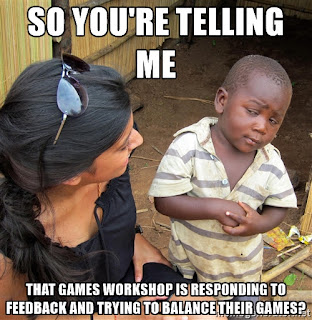 Here are some of the more significant highlights.

Potentially helpful for armies like daemon who run a lot of monstrous creatures.

Blast Weapons:
Preferred Enemy (or other versions of re-roll ones) doesn't allow you to re-roll Gets Hot on plasma cannons.

It still works with plasma guns and pistols.  Not sure I agree with the ruling, but OK.

Detachments and Formations:
"Q: Can units that are battle brothers embark in each other's transports before the start of the game?
A: No"

Wow.  This is a pretty big change.  Phil's allied drop pods won't be able to hold his cult mechanicus anymore.  If you are in the market for cheap drop pods keep an eye out. I would expect a few more on ebay.

Errata:
Psychic powers that don't have a ranged weapon profile (Aka psychic shriek) do not need to roll to hit.
Summoned/conjured flying mostrous creatures can arrive swooping or gliding.

Finally! Summoning Bloodthirsters is no longer a terrible idea.

Feel no pain:
Models with eternal warrior and feel no pain will still lose their feel no pain save against weapons that cause instant death.

I have heard this one go round and around.  Glad to have a ruling.

Fliers:
Fliers no longer crash and burn if you immobilize it (forcing it to move 18" straight forward) and it ends it movement on top of an enemy model.  Wobbly model syndrome.
Bombers can target units that are locked in combat.
Zooming Fliers and swooping flying mostrous creatures can be targeted by blast weapons with the skyfire rule.
Jinking prevents a flying monstrous creature from vector striking.

Lots of useful info.  Glad to hear about avoiding the crash and burn.  It always felt cheap.
I am wishing I had access to bombers.  An army of cultists/renegades could grab and hold units while fire reigns down from the sky.
Good change with the blasts.  Makes sense.
A bit of a nerf to monstrous creatures, but Jink hasn't felt significant in a while.

Grenades:
Only one model in a unit may use a grenade in the assault phase.

Possibly the biggest change here.  Walkers got a whole lot more survivable in close combat.  Possibly enough to bring the Kan Wall back in style?  We shall see.

Glad to have the clarification.

I wouldn't have expected either of these changes.  Looks like GW finally realizes how powerful invisibility turned out to be.

Psychic powers:
All models in a Brotherhood of Psykers unit are affected by blessings that target the psyker.
If you summon a bloodthirster, you can summon any variety (not Skarbrand)
If a unit that redeploys via deepstrike has a mishap, they can only go into deep strike reserves if every model has the deep strike special rule.  Otherwise, they go into ongoing reserves.

Biomancy on sanctioned psykers? Iron arm turns your squad into S6 T6 with smash.  Unreliable? Yes.  Potentially hilarious?  Yes.
The clarification here is nice.  Glad that I have been playing it correctly.
Interesting.  This makes gate of infinity a bit riskier.  If you screw up, you might have to walk back in on your table edge.

Interceptor:
Weapons with interceptor can shoot at models that disembark from a transport the turn it comes in from reserves.

Yay, I don't have to shoot the drop pod anymore.

Stomp:
You can stomp invisible units.

Terrain:
Units must be entirely within 12" of a void shield to be affected by it.
Void shields do not block psychic shriek.
If two players are in base contact with a gun emplacement, then they both control it.
Void shields don't get cover saves even if the models that are targeted do.

Nerfs to void shields.  I have only played against them a couple of times but they needed to get toned down.
Looks like sharing guns is ok.

Vehicles:
Hull mounted weapons have a 45 degree firing arc in all directions.
Units do not get a consolidation move if they destroy a walker in close combat.

The 45 degree arc doesn't seem like that big of a change, but a 45 degree vertical arc is going to have a significant impact on shooting at/with certain fliers.
Did not expect this. Ok. Possibly a slight buff to walkers?

Big Take Aways:
Void shields and invisibility got toned down.  Not a lot, but they are still in the 'really good' category.

Walkers got a bit of a buff.  Units only being able to use one grenade is pretty huge.  I might need to pick up a couple of maulerfiends here soon.  No consolidation after destroying a walker might not seem like a big deal, but consider how bunched up units are after combat.  Those are some juicy targets for flamers and blasts.

Not being able to start in allied transports is a massive change.  There are many armies that relied on this mechanic.  A lot of people are going to need to change up their lists.