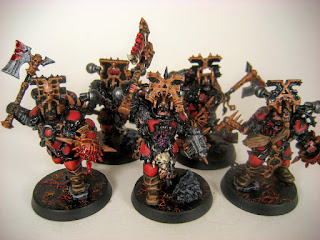 As I push forward with my Khorne Daemonkin I have begun to develop a gameplan that is a bit more than, "make an army that looks REALLY good."  The recent addition of renegade knight rules has me itching to build one (or two), and I wanted to design a force with a knight as the centerpiece.


I started thinking about how I can make an effective list centered around a knight, and I spent some time looking at the Legacies of Ruin section in Imperial Armor: 13.  These can be taken on any vehicle that isn't daemon engine or daemonically possessed as long as the army has more than 1000 points.  There are two Legacies of Ruin that specifically stand out to Khorne players.

_________ gives any unit within 12" of the vehicle who has a banner of blood feel no pain.  This would also make the knight daemonically possessed.  I could potentially create a large bubble of feel no pain units.  Infantry could serve as bubble wrap, and be tough as nails to remove.  The problem is that bikes are the only unit that can take the banner and move as fast as the knight.

The other option is to take "1st War for Armageddon", which would give +1 invulnerable save to any daemons of khorne within 6".  Hounds and bloodcrushers can easily keep up with a knight and a 4+ invuln is going to make your opponent really fight to remove multi wound models, but the benefit will only affect the individual models that are within 6".  Then I remembered that maulerfiends are also Khorne daemons in the Khorne Daemonkin book.

The thought of a Knight and two maulerfiends charging towards an opponent causes me the cackle in a most gleeful manner.  Give those maulerfiends a 4+ invuln, back up those three with the rest of a daemonkin force, and you have a recipe for a fearsome army.

As I started planning my army, I was concerned that an allied knight wouldn't have 'Blood for the Blood God.'  This would potentially be denying my army valuable blood tithe points.  The alternative would be to run a combined arms detachment and to use the forge world Chaos Knight rules.  This would limit my weapon options and I couldn't take the 'knight of khorne' upgrade with the legacy of ruin. Realistically, the chances of a knight averaging more than one kill per turn is unlikely.  Even without BftBG I am probably going to get more tithe points from the formation than a single knight.

I Made up a sample list.  At this point, I'm not sold of running a blood host, but here is what I have so far.


I plan on testing out the Blood Throne before I commit to buying one, but I think I can make this work.  With a wall of iron and brass, the Blood Throne is not going to be a large priority (hopefully).  It can also provide a much needed boost in making sure everyone hits (the biggest weakness of maulerfiends and knights in combat.

Right now, the list is at 1850 points, but if I drop points at all I think I am going to switch to a combined arms detachment.  I would more than likely bunch up the flesh hounds into a single unit, so I can keep both of the bikes.

What are your thoughts?  Does this seem like a decent plan, or am I totally off my rocker?

Also, enjoy a few shots of my most recently completed squad.  This is how I want to model my Berzerkers (yes, I know that there aren't any included in the list).  The pistol conversions were a bit blunt, but turned out ok.  When I convert a regular box, I am going to model them with two axes, and replace one axe with a pistol.  That conversion would not have worked here because everyone would have been swinging their pistols over their heads. 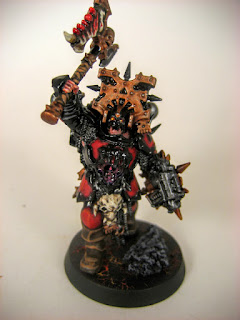 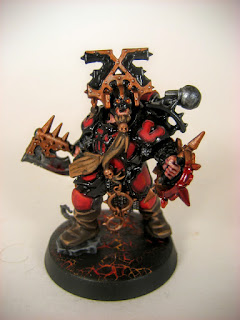 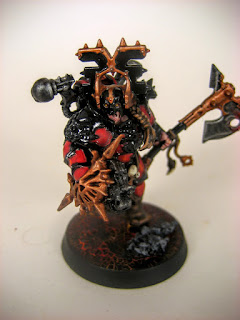 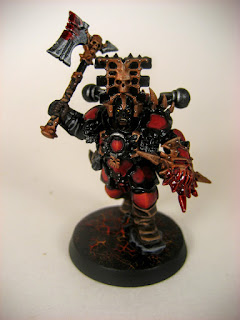 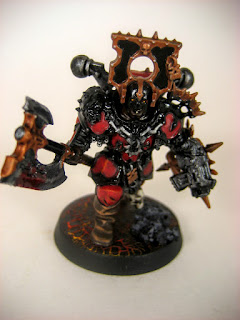