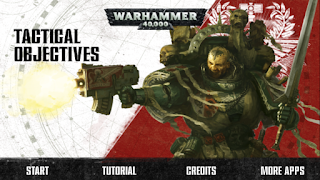 Back in January I reviewed the tactical objectives app and there were some serious issues.  Recently, there has been an update, so I wanted to revisit the app and see how things worked.

When I first reviewed the app there were several major issues:
1.) You couldn't draw new cards at any time (preventing you from getting rid of impossible objectives)
2.) The app took up an obscene (1.1 gigs) amount of space.
3.) The sounds were annoying and couldn't be muted.

It appears as if all three of these issues have been fixed.

The app has now dropped down to just under 700MB.

The sound seems to have gone away entirely.

In addition there is one new feature.  Now, you can manually adjust your score.  This helps for characters who get bonus victory points for being special, or custom scenarios. 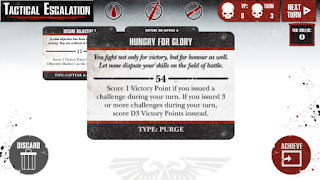 The +1 on the left side lets you draw new cards at any point in time, and the +/- on the right let you manually adjust your score.

With these changes, I would classify the app as a workable alternative to physical cards.  There isn't an advantage one way or another (unless, like me, you regularly lose your cards).  If you prefer digital format materials, then this app is worth checking out.