The Best of the Worst 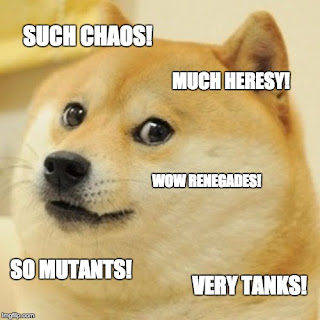 Recently, my gaming group got on the topic of, "What is the worst list that you can actually field?"  We talked about the worst units that people actually own as well as the most useless upgrades available.  Eventually we came up with an idea for a 'Best of the Worst' tournament.

We decided that everyone would make the worst list they could, and we would randomize who would play with what list.  At 1000 points, games would be short enough to avoid getting drawn out.  We want to have fun with this, and no one wants to play a three hour game of crap.  Part of our masochistic tendencies also has us wanting to try out multiple terrible armies, so we are likely going to randomize everyone's army between each round.

Here is what we came up with for the rules:
1000pts
Must be created from a combined arms detachment or a combination of formations, no unbound.
Must be playable, no null deploy to force and auto-lose.
You must have the models to field the army.

There are already threats Ogryns on foot, possessed without transports, and wyches; however, I suspect that renegades are going to take the cake of crappy armies.

One of the main benefits of renegades is that they have a ton of different customizable options.  If I am trying to make a crappy army I can waste points by purchasing options like tank hunter for units that only have las-pistols.

Here is what I came up with:


This is a real stinker of a list.  The hardest part about writing this list was making sure that I had models for everything.  It was actually fun to write a list that was as terrible as I could manage.

How about you?  What is the worst list you could field?
Posted by Andrew at 9:30 AM