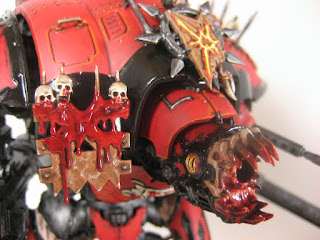 After a long month, and many hours at the painting table, my renegade knight of Khorne is complete!
This project was an absolute blast.  I worked in sections for assembly and painting.  The legs were 100% complete before the torso was fully constructed. 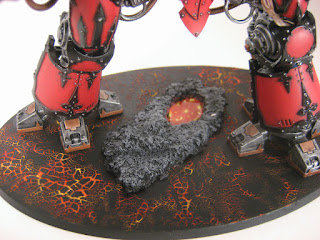 The technique I have been using for bases was tricky on such a large base.  Since the Martian Iron Earth paint is not distributed evenly, parts of it dry faster than others, and I essentially had to chase the portions that were already dry rather than working from one side of the base to the other. I used a lot of custom bits.  Both of the gatling cannons were taken from my left over forgefiend bits.  I decided to create the armored portion out of plasticard.  I freehand drew the shapes that I wanted, and things ended up a bit crooked, but this is chaos! As I get more experience with plasticard I am going to invest in some small square graph paper to help get properly proportioned shapes.  If I really feel like redoing the gatling cannons I will have more bits from my next maulerfiend.  Everything is magnetized, so any of the weapons can easily be replaced. 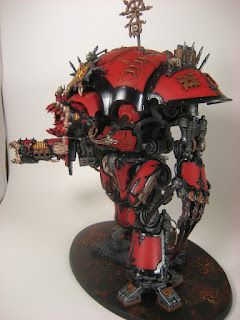 The magnetization took the most time out of this whole project.  I'm fairly certain that I re-worked each joint at least once.  Now I have a new technique that makes life much easier.  I will write up a tutorial here soon. 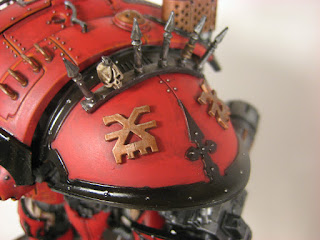 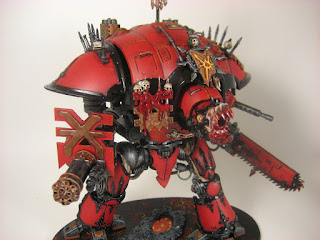 More than likely I will be running this monster with a gatling cannon and the chainsword.  I think these offer the most versatility. 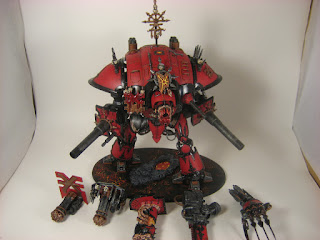 Next on my table, I picked up a box of chaos warhounds to use as flesh hounds.  Hopefully I can get those done in the next week and a half (before I leave for vacation).