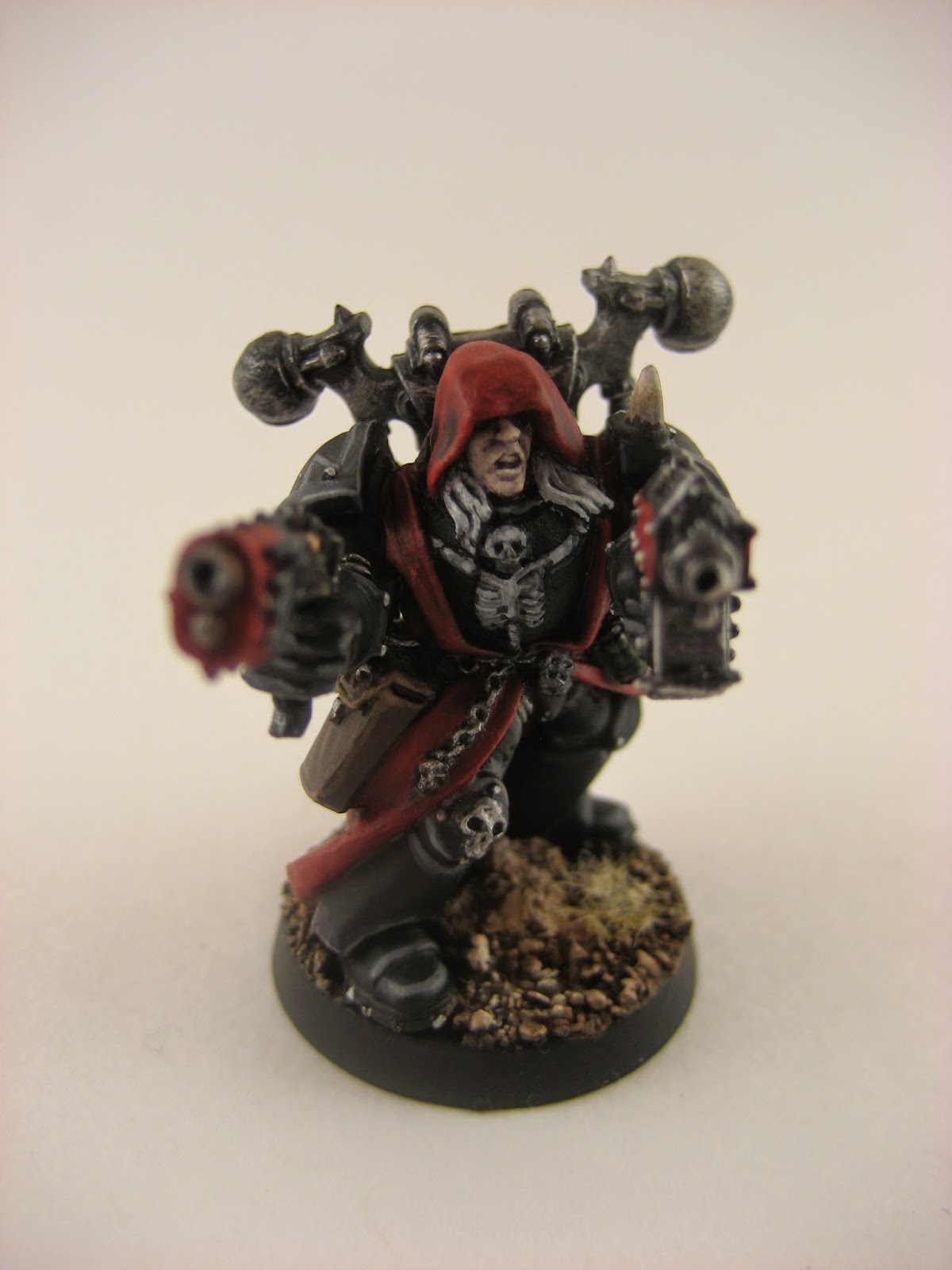 The final night of our league tournament was this week.  I had already made it farther than I expected, but how far was I able to take my army?

Autarch (I think): on a jetbike (with the dark eldar jetbikes)

Wraithknight
The jetbikes get +1 toughness for the combat drugs, and the Archon + firedragons combo is deepstriking.

Turn 1:
I go first, move up, and literally the only thing I can see is the wraithknight.  My opponent is very spread out, but everything is out of LOS.  I shoot at the wraithknight with the predator and the helbrute and I manage to put two wounds on it.

He moves up, kills a couple of marines from the big squad, and wipes out the three bikes.

Turn 2:
My terminators arrive, and they land about 6" from his line.  The helbrute can only see the wraithknight and puts another wound on him.  Everything else fires into one of his venoms and I do one hull point of damage.  His jink saves were unbeatable.

Both the jetfighter and the firewarriors come in.  He scoots his transports around to avoid getting charged, his Eldar jetbikes move up my flank, and the Dark Eldar jetbikes get close enough to the terminators to charge.  The wraithknight decides to go after the helbrute,  and manages to shoot off the powerfist.  My terminators soak up most of his firepower, but they end up getting wiped out.  The jetfighter takes out one of my rhinos, and the firedragons take out my predator.  His wraithknight charges into my helbrute and does one hulpoint of damage.

Turn 3:
I immobilize his raider containing the firedragons, kill a few bikes, but I am out of range to charge anything with the big squad, so I sit out in the open.

He zooms around with everything, fires his lazors (pew pew), and by the end of the turn all I have remaining is one rhino with five chosen.  We call the game and he wins.


The final game was between the Dark Eldar player I lost to and the Clan Raukaan player I played a few weeks back.  During the final game I noticed something relevant.  With 16 players in the league, two of them were playing the final match of the tournament, two of them were watching, and everyone else was watching a fun match on a different table.  This could be from the demographics of our gaming store, but people seemed to be drawn towards the hilariously silly match over the competitive match.


I lost, I'm not surprised, but I am happy that I made it this far.

Moving forward I may put the Fallen Angels on the shelf.  I won best painted army (first time with this particular army), so I feel accomplished.  Right now I have the starting of a Traitor Guard force and I want to expand it up to full size.  I am also going up to South Dakota next week, so no battle reports for a while, but I do have several other articles in the works.