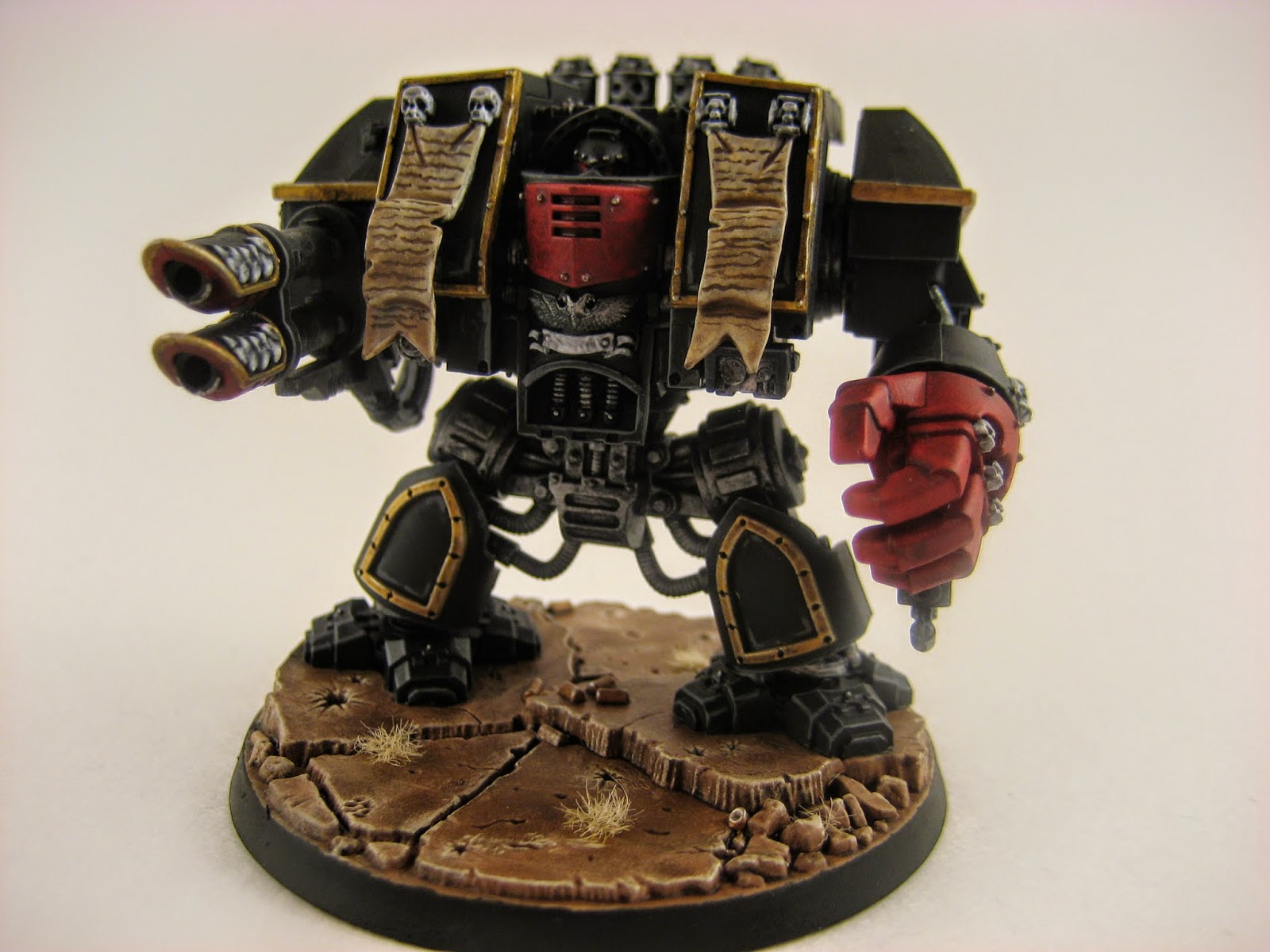 If you were a regular reader of daemons40k you might remember that I was in the middle of a league.  Well last week we were bracketed into a single elimination tournament.  Our points were increased to 1250, up from 750, and I brought most every Fallen Angels model I own.  Things turned out hilarious and slightly enlightening.

Here is the list I brought.  I didn't expect for it to be competitive in any sense of the word, and I didn't really care.  At this points level I had to bring every model I own for this army with the exception of a few HQ's.

The plan was for the Dark Apostle to be in the large blob of chosen, they would all charge hilariously down the field, and most likely get massacred by whatever was shooting at them.  Everything else would take potshots at whatever I could, and that would be that.


Turn 1:
I move everything up, immobilize one of his transports, and not much else since I is hidden pretty well.
He responds by flanking me with the small squad of bikes, moving the big squad of bikes up the center, and opening up both of my transports.

Turn 2:
My terminators land between his big squad of bikes and a couple of his transports.  I move my two small squads of chosen into cover (since I know he doesn't have grenades).  The big squad of chosen moves up close enough to counter-assault if he decides to charge me, and the helbrute comes along for support.  My shooting takes out a couple of bikes and forces several of his transports to jink.
He moves his bikes back to block a potential charge on the transports, but he decides not to charge me since the helbrute will be close enough to charge next turn.  He small squad of bikes takes two hullpoints off of my predator, and general shooting killed a bunch of marines.

Turn 3:
My terminators move forward and get ready to charge the bikes, the helbrute moves up and the big squad of chosen moves back to get the bikes in double tap range.  The helbrute blows up the archon's transport, one of the medusas dies, and they end up sitting in cover.  His small squad of bikes is wiped out by some serious bolter action from the large squad of chosen.  My terminators charge his bikes, and the helbrute decides to go after the archon and he actually makes the seven inch charge through cover!  The terminators only kill one bike (derp!), but he manages to fail his hit and run roll, so we stay locked in combat.  I lose one terminator in return.  My helbrute brings the pain and manages to kill both the archon and the bodyguard despite the 2+ invuln save on the archon.
His wracks and Haemonculi pop out of their transport and charge into the terminators, the Ravager pops the helbrute, and combat saw me win by one (I lost another terminator) with the bikes fleeing.

Turn 4:
I move my stuff back to control my objective and preventing him from charging me to get linebreaker.  I kill a few of the wracks, but my terminators are wiped out in the process.
He moves around, kills a few more marines with shooting, but nothing significant happens.

The game is called with 5 min to go.
We both had our objectives, he had first blood, and I had slay the warlord.  My opponent gave me the victory because he was running on 3 hours of sleep and didn't have the energy to play the second game.

My helbrute was the star of this match.  90% of the time I run a helbrute it doesn't do much, but this time it made up for all of the other bad matches.

I looked at his army and just laughed.  "I am so screwed" were my exact words.

He moves everything forward, misses with his large blast, and rolls a 4 on the warpstorm table (-1 to his invuln save)

I move right up next to the flesh hounds, unload everything, and kill half of them thanks to his reduced save.  I force jinks on the two daemon princes, but I don't cause any wounds.

He moves up again.
His warpstorm table rolls Wrath of Khorne, hits three of my units, and manages to kill two of my bikers.
He charges my big squad of chosen with the remaining flesh hounds and one of the daemon princes, and kills all but two who run away and end up off the board.  He attempts to charge my helbrute with his other daemon prince, fails the charge, and gets a wound from the overwatching lascannon.

My terminators land by his back nurglings and soulgrinder, and the rest of my army shuffles around.
I kill a few more flesh hounds with shooting, as well as a couple of nurgling bases.
I charge his daemon prince with my hellbrute, he does one hull point, and I insta-kill him.

Once again the Great Unclean one does not come in.
He shuffles around, does 2 wounds to karnak with the warpstorm table, and charges one of my rhinos and the remaining bike.  The soulgrinder also decides to go after my terminators.
The rhino gets wrecked, and the bike dies horribly; however, the terminators only lose one model, and I manage to do one hull point in return, so we stay locked in combat.

I shuffle around as well, and I don't think I kill anything with shooting.
My helbrute charges the other daemon prince, and insta-kills him too!  The terminators also decide to roll like bosses, making two invuln saves, and doing two hull points in return.

His Great Unclean One finally comes in, but immediatly mishapps, and I place baby in the corner.
Karnak and the remaining two hounds wreck the predator, and I finish off the soulgrinder after he wiffs his attacks.

I finish off the hounds and one of the squads of nurgling on my turn, and we call it a game.

Daemon princes scare the shit out of me.  Whenever I face them they tend to break up my army.  This was a complete surprise.  Once again the helbrute got MVP, but the terminators got a close second for managing to take down the soulgrinder.  Monstrous Creatures always give me trouble, and I had never considered the helbrute to be a bastion of power, but he really saved the day.